Rocks Returned to The Rock 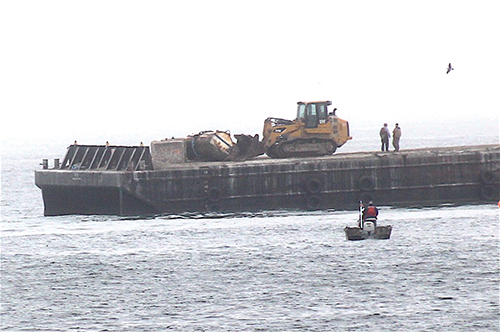 A pair of large tugboats tended a barge carrying thousands of tons of boulders from the Port San Luis Breakwater, back to Morro Rock where they were originally mined by the Army Corps of Engineers. Photo by Neil Farrell

The Army Corps of Engineers recently began its project to rebuild the breakwater at Port San Luis (Avila Beach), repairing a rock structure originally made with thousands of tons of granite mined from Morro Rock in the early part of the last century.

The work was anticipated to need to remove and replace about 10,000 tons of boulders, some weighing as much at 10 tons. The ACOE, in consultation with local Chumash, decided to return the unneeded rocks to Estero Bay, where last week a bulldozer pushed them off a barge into the ocean about 1,500 feet off Morro Rock.

Despite the poor visibility in a thick fog, over a dozen people turned out to watch the spectacle from the North Jetty.

The PSL project, which started in August, according to a Coastal Commission staff report, “includes the repair of approximately 1,420 feet of existing breakwater by resetting stones and raising the overall height of the breakwater by 3 feet (back to its original design height and configuration).”

The Coastal Commission was the final approval ACOE needed to get the work started, after over seven years of planning.

The original breakwater boulders were quarried from Morro Rock by the ACOE, which removed a million tons of rock from the late 1800s, until the early 1960s when quarrying was halted forever.

Morro Rock is now part of Morro Bay State Park and protected. It is also a sacred site for the Chumash and Salinan tribes that populated the area for thousands of years.

As part of the quarrying operation, the ACOE built the causeway out to Morro Rock (now Coleman Drive) and the rock revetment that created the Morro Bay Harbor and Embarcadero business district.

The spoils of Morro Rock also built breakwaters up and down the Coast, including at Port San Luis. But it’s turned out that the particular kind of granite of Morro Rock isn’t well-suited to make jetties, and so the new rocks that will be used to rebuild the PSL breakwater will be brought in from other quarries.

As for the new reef here, according to the ACOE, “The footprint of stone placement will encompass up to approximately 3-acres of the sandy ocean bottom at a depth ranging from approximately -50 to -65 feet Mean Lower Low Water.”

As is the nature of the ocean, all manner of sea life is anticipated to immediately start attaching itself to what will become a reef and, it’s hoped, a good fishing spot, though some might think the area a bit close to the rocks of the jetty.