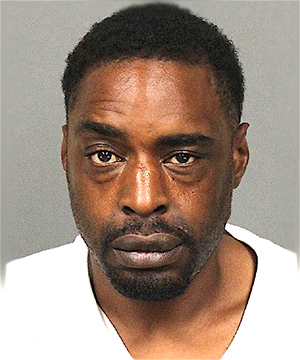 Lucion Banks, 38 of Sacramento, was sentenced to 15-years to life in prison after he was convicted of forced sex trafficking of a 14-year-old Oakland girl, who was freed after a SLOPD traffic cop stopped a suspicious vehicle in October 2018.

A Sacramento man was sentenced to 15-years to life in prison after being convicted of child sex trafficking of a teenage girl.
According to District Attorney Dan Dow’s Office, Superior Court Judge Barry LaBarbara sentenced Lucion Lee Edwards Banks, 38 of Sacramento, for human trafficking the girl “by use of force, fear, fraud, deceit, coercion, violence, duress, menace or threat of unlawful injury.” Banks will also have to register as a convicted sex offender for the rest of his life.

The case started in October 2018, when San Luis Obispo traffic cop, Quentin Rouses, pulled over a suspicious vehicle and “quickly revealed evidence that Banks was involved in trafficking the young survivor for commercial sexual exploitation.” Banks has been in SLO County Jail; all this time, held on.

The victim, who is now 17-years old — testified both at trial and at sentencing. According to a Tribune news article on the case, the victim told the court that she was abandoned by her mother and given to the streets on Oaklands International Boulevard, an area notorious for prostitution.
At the sentencing hearing, she reportedly said her life is much better after the SLOPD officer saved her.
“I am glad to say, I feel no more fear,” she told the court. “I am going to graduate high school. I am going to beauty school. And, also I am going to have my own apartment. I feel like if the San Luis Obispo Police Department did not make that stop, that he [Banks] would have kept hitting me and using me.”

According to the D.A.’s Office, they got help from some outside agencies, including an expert witness from the Alameda County District Attorney’s Office. “Inspector Tim Bergquist, testified on the subject of human trafficking, explaining the dynamics and sub-culture of human trafficking to the jury,” the news release said. “Alameda County District Attorney Nancy E. O’Malley has been a California statewide leader on combating trafficking and created HEAT Watch several years ago.”

Human t5afficking is a growing scourge on society that the District Attorney has taken a specific interest in combatting. If you or someone you know is being forced to engage in any activity and cannot leave — whether it is commercial sex, housework, farm work, construction, factory, retail or restaurant work, or any other activity, call the National Human Trafficking Hotline at: 1-888-373-7888 or Text 233733 (BE FREE).
Locally, contact Crime Stoppers at (805) 549-STOP; text “SLOTIPS” plus your message to CRIMES (274637). You can also call the District Attorney’s

Victim Witness Assistance Center at (805) 781-5821 or toll-free at (866) 781-5821.
Also, see the website: www.slocounty.ca.gov/Departments/District-Attorney/Victim-Witness-Assistance-Center/Human-Trafficking.aspx for more information on the Anti-Human Trafficking Taskforce and available resources.