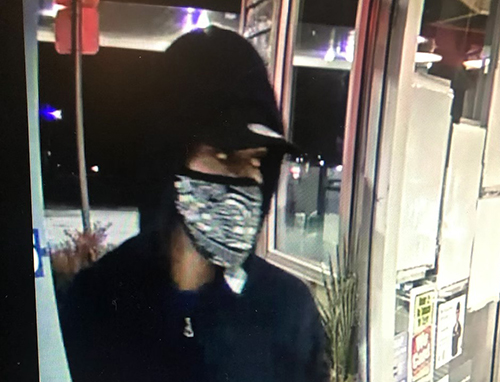 The Sheriff’s Office is asking for information on this man who allegedly comitted armed robbery at a gas station in Nipomo.

Sheriff’s deputies are investigating an armed robbery in Nipomo where a solo gunman stuck up a gar station and made off with an undisclosed amount of money and merchandise.

According to Sheriff’s spokesman, Tony Cipolla, at 11 p.m. Thursday, Dec. 3 they got a report of a robbery at the Chevron gas station, 460 W. Tefft St., Nipomo.

“Witnesses say a man entered the station,” Cipolla said, “displayed a black pistol and demanded money and goods from the clerk. The suspect made off with an undisclosed amount of cash and items and was last seen running away toward South Oakglen Avenue in Nipomo. No one was hurt in the incident.”

The suspect was described as a thin, Hispanic male in his mid-20s, 5-feet 9-inches tall. He was wearing dark blue jeans, a black or navy blue sweatshirt and a dark hat when he stuck up the gas station.

He was also wearing a facemask, as per the Governor’s coronavirus pandemic edicts and store policy, so even though he looked directly at the surveillance camera, his actual face was concealed from view.

If anyone has information on this incident, contact the Sheriff’s Detective Division at (805) 781-4500.