Sheriff to Get Ballistic Shields 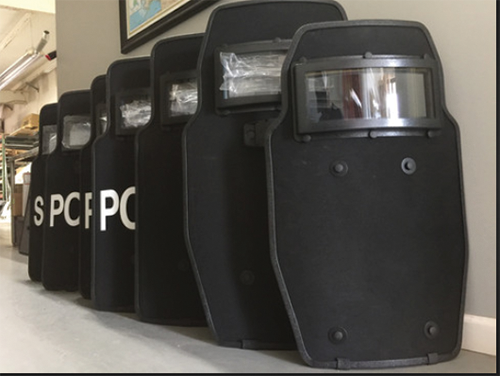 The County Sheriff’s Department is ordering specialty safety equipment in the face of a steep rise in “active shooter” incidents.

County Supervisors approved spending $125,000 out of the “Supplemental Law Enforcement Services Fund,” for 20 “ballistic shields.” Given the recent number of shootouts the department has had with in most cases, mentally ill suspects, the Sheriff wants to increase safety for the deputies who are exchanging fire with these people and the people they’re trying to protect.

“Over the last year,” the report said, “San Luis Obispo County has experienced an increase in the number of active shooter and officer involved shooting incidents. The Sheriff’s Office has responded to each of these incidents as they were unfolding. Deputies engaged in evacuations of civilians and rescues of wounded officers, several times while under fire from the suspect.”

The shields offer different protections than the bulletproof vests deputies wear on duty. “The Sheriff’s Office issues deputies bullet resistant vests to wear while on duty. This equipment protects a person’s vital areas; however, it is limited in the overall protection it affords the wearer and it offers no protection to people who the deputies are rescuing in an active shooter incident.

“Ballistic shields provide superior protection and will allow deputies to move quickly and safely on foot while rescuing injured persons in open areas or while performing evacuations of people who are threatened by an active shooter.”

The Sheriff’s Department has had three shootouts with suspects — two were in Paso Robles and included several deputies being wounded, and one at a gas station in Nipomo. In each case, officers killed the suspects.