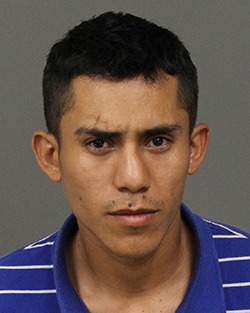 Sheriff’s Deputies have arrested as Cambria man they say sexually assaulted a woman who was walking on a public hiking trail, and used a new law enforcement tool for the first time to identify the man.

According to Sheriff’s spokesman, Tony Cipolla, at about noon, Sunday, June 27, a woman was hiking on the Santa Rosa Creek Hiking Trail, south of Windsor Boulevard in Cambria, when she was attacked from behind.

“The victim was dragged off the trail by a male suspect who was unknown to her,” Cipolla said in a news release. “The suspect held the victim against her will and sexually assaulted the victim over the next several hours before leaving her and fleeing the area.”

The woman, who was not identified, called the Sheriff’s Office the next morning, June 28.
“Detectives immediately began an investigation,” Cipolla said, “and were able to collect DNA evidence, which was processed using the ANDE Rapid DNA instrument to develop a DNA profile of the suspect.”

Cipolla said this was the first time the department has used the Rapid DNA instrument.
Investigators were able to identify a likely suspect and according to Cipolla, the victim identified him in a photo lineup, which set off a manhunt throughout Cambria for Jesus Barajas Valdovinos, 31 of Cambria.

“The Sheriff’s Office saturated the Cambria area with both marked and unmarked patrol units,” Cipolla said, “while Detectives continued their investigation and attempted to locate Barajas Valdovinos.”

They caught up to the alleged rapist on July 2 at about noon in the 4000 block of Burton Dr. Barajas Valdovinos was arrested and transported to County Jail where he was booked on suspicion of sexual assault.

Such ambush-style sexual assaults are rare in San Luis Obispo County but have happened. For example, several years ago, San Luis Obispo and Cal Poly Police had numerous cases of college co-eds being assaulted at night while mostly walking alone in the neighborhoods around the Cal Poly Campus.