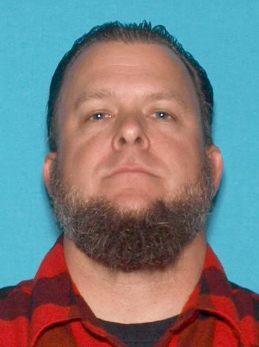 Scott Huffman, 42 of Bakersfield was shot and killed by Sheriff’s Deputies after an active shooter incident at a gas station/mini mart in Nipomo on Aug. 21.

Sheriff’s deputies shot and killed a man in Nipomo who had opened fire on a local gas station and fired several rounds at a passing fire truck.

According to Sheriff’s spokesman, Tony Cipolla, about 11:15 a.m. Friday, Aug. 21, deputies responded to a report of shots fired at the Vons Gas Station in the 500 block of Tefft St.

“Witnesses reported seeing a man firing a handgun indiscriminately in the parking lot of the shopping center,” Cipolla said. “When Deputies arrived, the suspect entered the Vons gas station at the corner of West Tefft Street and Mary Avenue. The suspect fired shots inside the building.”

The gunman left the store and was confronted by deputies and a Highway Patrol Officer and when he reportedly opened fire at the officers, they shot and killed him.

The shooter was identified as Scott Huffman, 42 of Bakersfield.

“Law enforcement,” Cipolla said, “canvassed the entire area, which included numerous businesses on both sides of West Tefft and confirmed there were no injuries and to make sure the public was safe and secure.”

Police from several agencies and departments responded. “Sheriff’s personnel including Sheriff’s deputies, detectives and Special Enforcement Detail [SED] responded to this incident along with the CHP, the Regional Swat Team, FBI, State Fish and Wildlife, and Cal Fire,” Cipolla said.

In a later press release, Cipolla added details of what occurred. “The suspect was shooting multiple rounds at the Vons gas station convenience store,” Cipolla said. “After shooting several rounds at the exterior doors of the convenience store, the suspect walked toward Tefft Street as he continued to fire multiple rounds toward businesses on the south side of Tefft.

“The suspect then shot multiple rounds at a Cal Fire fire truck that was traveling Eastbound on Tefft responding to an unrelated call for service. The fire truck was struck multiple times in the passenger door.

“The suspect then entered the center median of Tefft Street and pointed his handgun at motorists. The suspect made his way back to the Vons shopping center parking lot, where he ultimately made entry into the same convenience store he had shot previously.”

He fired more shots from inside the store, Cipolla said. The gunman reportedly left the store and continued to fire his handgun and that’s when officers arrived, shooting and killing him. Cipolla said no law enforcement officers were injured.

“The Sheriff’s Office’s Major Crimes Unit immediately began an Officer Involved Shooting investigation with assistance from the California Highway Patrol and FBI,” Cipolla said. “At this point, a motive for the shooting is still being investigated.”

Cipolla said investigators were looking for a possible witness seen talking with the suspect. “During the incident,” Cipolla said, “the suspect made contact with a person driving a 4-door, black, hatchback vehicle on West Tefft Street just east of Mary Avenue. Investigators are asking the driver of that vehicle to contact them with regards to this incident at 805-781-4500.”