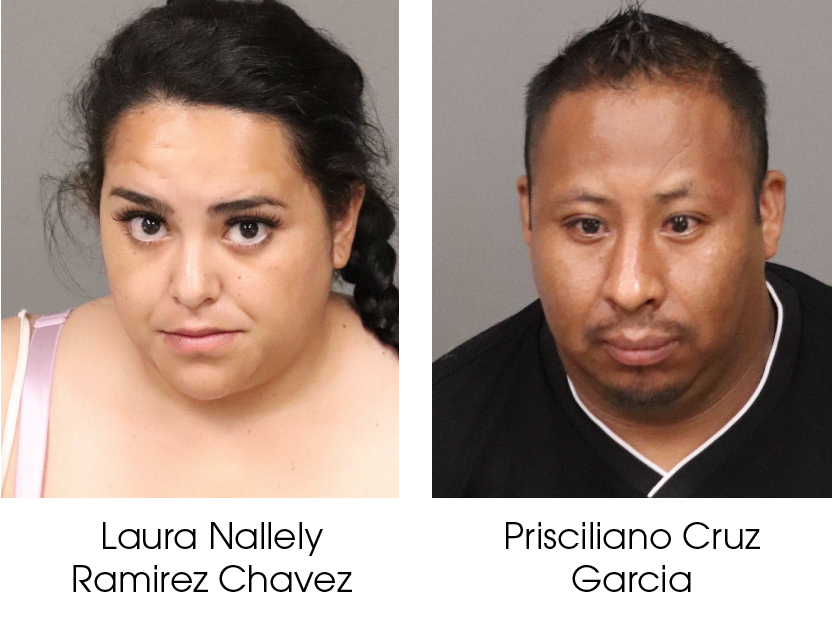 The Sheriff’s Department busted a Paso Robles couple on various drug charges after a K-9 officer sniffed out illegal drugs inside their car.

According to a news release, at 5:30 p.m. Sunday, Aug. 2 a Sheriff’s K-9 Unit stopped a suspicious vehicle on Hwy 46 East near the Whitley Gardens neighborhood, east of Paso Robles for suspicion of speeding and an expired registration tags. A man and a woman were inside the vehicle.

“During the traffic stop, an open-air sniff around the vehicle was conducted by K-9 Rooster, who had an alert for the odor of narcotics,” Sheriff’s spokesman Tony Cipolla said.

The deputy searched the vehicle and, “a small baggie of suspected powder cocaine was located, as well as two Zip Lock sandwich size baggies of light-green-colored, round pills, suspected to be counterfeit hydrocodone pills.”

The deputy also found some $1,500 in cash; and it was all seized. The occupants of the vehicle were Prisciliano Cruz Garcia, 30 and Laura Nallely Ramirez Chavez, 27 both of Paso Robles. The pair was arrested and narcotics detectives obtained a search warrant for the their apartment in Paso Robles.

“Narcotics detectives from the Sheriff’s Special Operations Unit, San Luis Obispo County Probation Department and Homeland Security Investigations served a search warrant at an apartment in the City of Paso Robles, where Garcia and Chavez were residing,” Cipolla said.

The search discovered additional counterfeit hydrocodone pills similar to that located in the traffic stop, Cipolla said, approximately three-quarters of a pound of heroin with a street value of $10,000, nearly $8,000 in cash, and “evidence associated with suspected narcotics sales.”

“The pills from the traffic stop were later analyzed at the Sheriff’s Office Crime Lab and tested positive as a mixture of fentanyl and tramadol,” Cipolla said.

Approximately 2,000 pills were seized with a street value of $20,000, according to the Sheriff’s Office. “Of particular note as to the toxicity of Fentanyl, 2 to 3 milligrams is considered a lethal dose.”

The Sheriff’s Department said pills similar to those confiscated, “have been attributed to numerous overdose deaths” in SLO County.

In 2019, 14 overdose deaths were attributed to fentanyl and 12 deaths have been reported so far in 2020. But despite the cache of deadly drugs, the two didn’t stay in jail for long.

“Due to the zero-bail policy,” Cipolla said, “Garcia and Chavez, for the various felonies committed, were released back into the community within 4 hours of being booked into San Luis Obispo County Jail.”