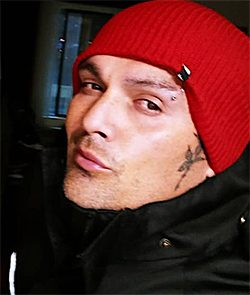 A man suspected of robbing an elderly San Luis Obispo woman and stealing her truck in February has been arrested clear across the country.
Johnny Jesse Roman, Jr., 38 of SLO, is suspected of invading the woman’s home on O’Connor Way if rural SLO, on Feb. 23, according to a Sheriff’s Office news release on March 19. He allegedly stole cash and the woman’s truck and fled the scene.
The Sheriff’s Office put out a be-on-the-lookout bulletin on Roman and the truck, which was found abandoned at a gas station in San Jose. Roman remained on the lam until detectives uncovered evidence as to his possible whereabouts.
“Detectives determined the suspect,” Sheriff’s spokesman Tony Cipolla said, “was staying at a residence in Virginia Beach, Virginia.” That was on St. Patrick’s Day, March 17 and Roman’s luck ran out the next day when Virginia Beach Police arrested him. Roman is being held pending extradition back to SLO County.
He faces charges of suspicion of robbery, false imprisonment, elder abuse and vehicle theft.

← Previous: Use Less Power at Home During Pandemic County to Audit Facilities for Energy Savings →