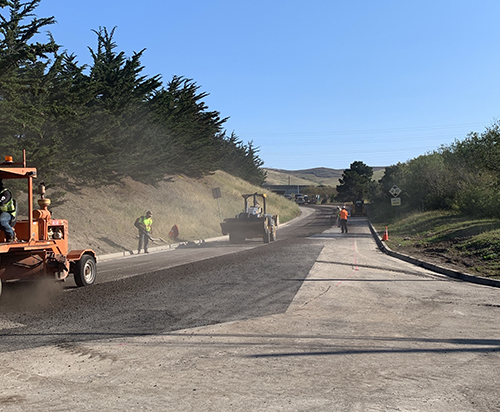 It took much longer than anticipated but the closure of South Bay Boulevard was slated to end last Friday, as Morro Bay’s Water Reclamation Facility Project starts to wind down.

Carollo Engineers, the project management company for the conveyance system work, announced last week that after being closed for 4 months, it would have South Bay reopened completely by the end of work on Friday, April 29.

According to Sarah Rossetto, who is handling PR for Carollo Engineers the project manager for the pipelines, said the South Bay trenching took 13-14 weeks and they didn’t run into any snafus, as they did with previous portions of the conveyance system job.

“There were not any problems,” Rossetto said, “aside from the challenging ground conditions we expected near the intersection of South Bay Boulevard and Quintana Road, which was the reason for the full road closure. Not a problem, but it did result in some slow production in that area.

“It took about 13-14 weeks all-in. The contractor had some setbacks with weather, and they were impacted by COVID-19 around the beginning of the year.”

Coming up, Rossetto said they will be starting work on Kings Avenue in mid-May, “laying the purified water line toward the roundabout, and then they will start putting the risers in out of the micro-tunnel casing [that goes underneath the Roundabout]. We are hoping to have Las Tunas open by July.”

Giant excavators have recently also been at work behind a temporary fence adjacent to the Roundabout. Rossetto said they were digging out the pipelines, putting in risers to shore up the trench for worker safety and getting ready to connect up the pipes.

Anvil, the City’s contractor for the $31 million pipeline portion of the project, trenched down South Bay and under Hwy 1 connecting the pipes running down Quintana Road to the WRF treatment plant, which is nearing completion on ranchland above the terminus of South Bay.

The Hwy 1 off and on ramps at South Bay have been closed since January with detours forcing motorists going from SLO to Los Osos to make the left turn off Hwy 1 at San Bernardo Creek Road.

The WRF, at some $145 million and counting, is the largest public works project the City of Morro Bay has ever built and, “will meet state water and wastewater regulations, protect the environment, and contribute a safe and reliable water source for Morro Bay’s residents and businesses,” Carollo’s announcement said.

“Thank you to the communities of Morro Bay and Los Osos, and users of South Bay Boulevard, for demonstrating patience and cooperation during this extended road closure! “ Carollo said.

Construction notices on the WRF’s progress and upcoming inconveniences are posted online at: morrobaywrf.com. Email to: wrfinfo@morrobayca.gov or call 877-MORROBAYH2O with questions about the City’s WRF Program.