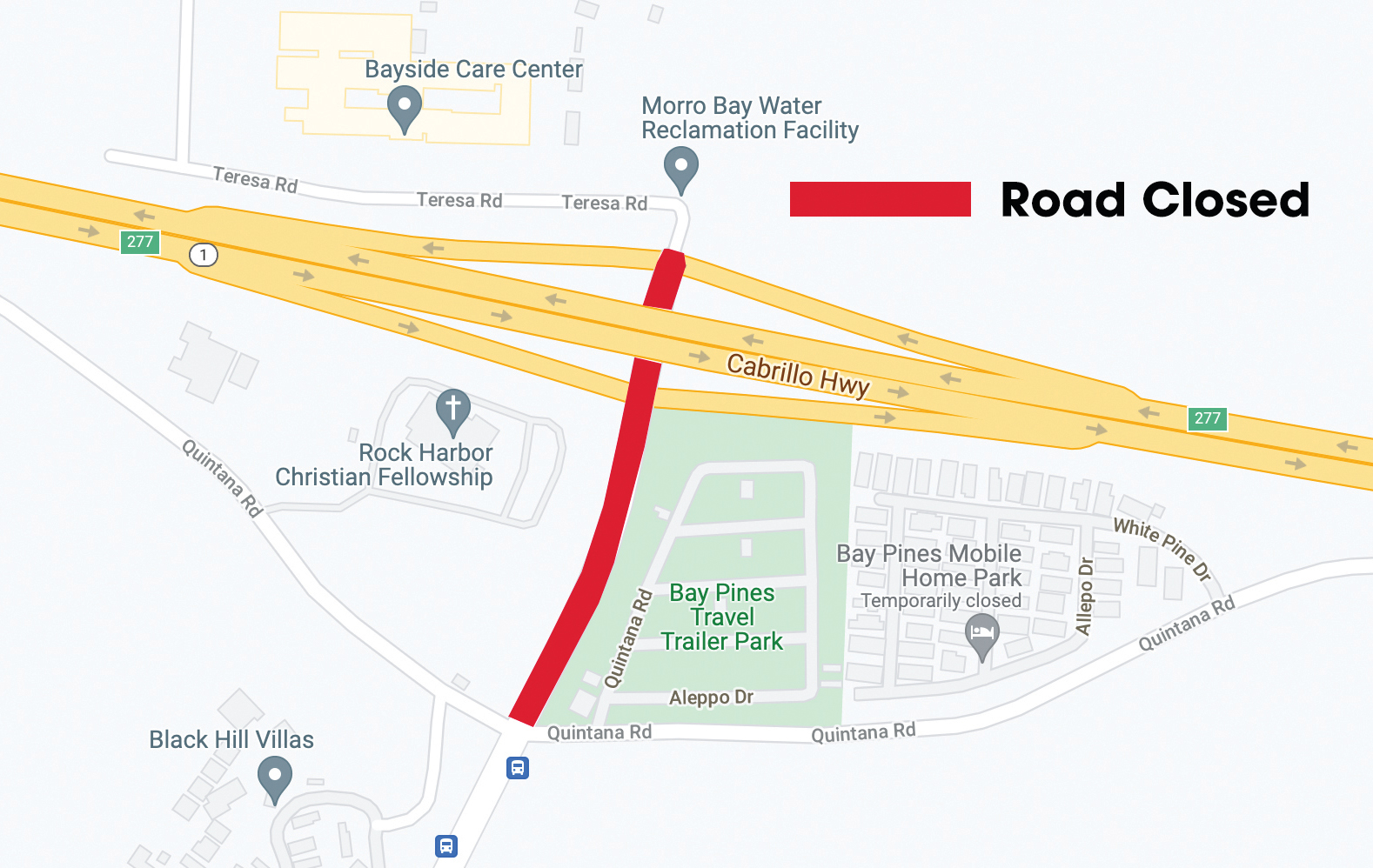 Estero Bay Area residents will soon have to deal with another major road closure as part of Morro Bay’s Water Reclamation Facility project.

Carollo Engineering’s Paul Amico, the project manager for the pipeline portion of the WRF, said they plan to completely close South Bay Boulevard from Quintana Road to Hwy 1 beginning Dec. 27, as the pipeline trenching makes the turn towards the new treatment plant site, located on the hills above the terminus of South Bay.

The roadway will be closed for some 8 weeks, he said, weather permitting. “Highway 1 will be fully accessible via Quintana Road and Morro Bay Boulevard,” Amico said, “while construction is south of the ramps, and we are still working out the details with Caltrans on how we will control traffic as the pipelines are constructed within their right-of-way.”

Originally, they were hoping to keep traffic flowing on South Bay, but Amico said, “It will not be possible due to the ground conditions in the area and our concern for worker and public safety while trenching through that area.”

He explained that the contractor Anvil Inc., as it trenched up to South Bay on Quintana ran into high groundwater and an odd soil type — runny ground with lots of organic materials, which threw some level of uncertainty into keeping traffic flowing through one lane.

To be on the safe side, he said they decided to just close that short stretch of South Bay all together rather than risk having the roadway start to crumble away while traffic tries to drive on it. It makes sense there’s lots of organic matter as that whole area is actually part of the flood plain for Chorro Creek.

The City and project contractors know that it’s a heavily trafficked area. “We are aware that South Bay Boulevard is a thoroughfare for school traffic and Los Osos traffic,” Amico said, “and we specifically selected this timing for the start of the closure due to reduced traffic and the school break during the holidays.”

While the official detour will steer people to the Morro Bay Boulevard interchange off Hwy 1, another potential route is to get off the highway at San Bernardo Creek Road, where Quintana meets the highway. That stretch of Quintana will remain open and is another way to circumvent the construction zone without having to go all the way into town. Quintana Road will be open in both directions, Amico said, from Main Street to Hwy 1. There could however, still be some traffic controls in place depending on the progress of the job.

Readers going to and from Los Osos to Morro Bay could also take State Park Road during the closure and avoid the construction area all together. Also, access to the Casa de Flores senior living facility will remain open and construction vehicles also need access to the work site.

In a future curfluffle, the trenching work will eventually reach the highway on and off ramps and the South Bay overpass. Amico said they are working with Caltrans on how to handle that and it may be that they do that segment of work at night to minimize disruptions. That area should be reached in about 6 weeks, he said.

As for another job site, he said the work being done now on Main Street — from Quintana to Lemos Ranch — will be closed up and the area will be open during the Christmas Holiday.

Readers are reminded to drive carefully through the project’s various construction zones — on Main Street, Quintana Road and Atascadero Road by the old sewer treatment plant — and to be mindful of workers and heavy machinery.