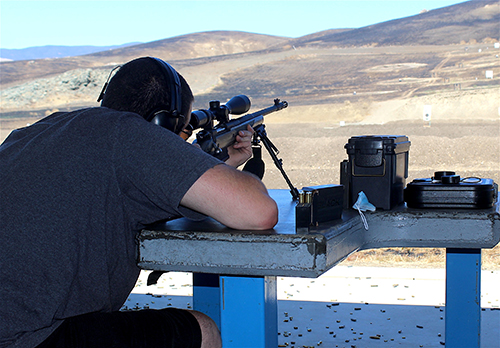 Cheyne Jackson sights in on a distant target with a Ruger .308 hunting rifle at the
SLO Sportsmen’s Association’s Gun Range.

You’ve no doubt driven past it on Hwy 1 countless times, heard gunfire and wondered what they do out there below Hollister Peak?

The San Luis Obispo Sportsmen’s Association shooting range is a multi-faceted facility with a dozen areas for different types of shooting and archery, as well as being a local leader in gun safety.

And while the range, like most every other business in California, was shut down for 90 days in the coronavirus pandemic response, it’s open again and more popular than ever.

Indeed. The gun range has been riding a wave of popularity in shooting sports and self-defense that’s also manifested in a recent run on guns and ammunition at gun shops.

“We’ve been open for 35 years,” said Julia Soto, the range’s general manager. It started with one small-bore public shooting range. In 1991 the “Long House” the most visible building from the highway was put in for rifle and pistol target shooting.

The education building, where safety courses are held, came next and is a short distance away; and then the shotgun range — used for skeet and trap shooting — was put in.

Also close to the highway are a target archery range popular with kids, and the Hogue Action Pistol Range, where law enforcement officers often train, and where pistol-shooting championships are held.

Towards the rear of the 460-acre property are the “Back Ranges” — a long-range (up to 1,700 yards) course, and the Cowboy/Chorro Valley Regulators’ Old West range. That’s the site of annual quick shooting championships where competitors dress in Old West period clothes, adopting colorful nicknames and personas.

There’s a range for muzzleloaders/black powder shooting and an archery “walking course” where archers follow a trail and shoot at targets in the distance.

The education building has seen a lot of activity of late. Soto said they originally only put on hunter safety courses and law enforcement courses but lately, “We’ve been inundated with calls, it’s crazy,” she said.

They now hold classes that lead to getting a “Firearms Safety Certificate.”

When someone buys a gun, they take a paper safety test at the gun shop as part of a background check and wait period. “What we’re offering is the safety course,” she said. “The NRA basic pistol safety class. You get a certificate of compliance from the NRA.”

“In California,” she said, “there’s no shooting tests. This course is because people want to be safe” with their weapons. There’s also an “Intro to handguns,” an abbreviated 2-hour class for those who don’t want the full, 9-hour, all-day safety course.

There’s also a “Guns and Ladies” course, she said. “That’s held once a month, with a female instructor. It teaches women how to shoot.”

Soto said their safety courses emphasize four things: first treat every gun as if it is loaded; keep your fingers off the trigger until ready to shoot; never point a firearm at anything you are not willing to destroy; and, know your target and what is beyond it. (That last one is in case you miss.

“We teach them how to load a magazine and then we get them shooting.”

They are not allowed to rent guns, she explained, but they have some instructional guns — .22-calibers and 9mms — so one doesn’t have to actually own a gun to take a safety class.

The Sport’s Association has some 1,300 members, but Soto said the range is a public facility open to anyone to use for a fee. Certain people get a discount.

“Military and law enforcement are our friends,” said Soto. “We like to cut them a break. And we get a lot of SWAT and sniper teams that practice here.” Such teams can be from anywhere in the state and come here because of the long ranges, which go from 200 to 1,700 yards. “We’re the only range in the state that goes out that far,” said Soto.

Safety on all the ranges is paramount and overseen by safety officers. “We ask everyone if they’ve been here before and give them a little orientation speech,” said Soto. They also go over the range rules and firing line rules.

Guns Must Be Legal

They allow any legal gun to be fired, which would exclude automatic weapons like machine guns and others the state has banned.

“If you bring a .50-caliber,” she said, “you have to bring your own targets. I will be leaving the premises because that’s going to hurt” as in extremely loud.

“We haven’t had anyone come out with anything automatic, but we do have people who like to rapid-fire.”

If guns are not your thing you might consider archery. A person can rent archery gear at the club and it’s open to all ages.

There are two courses, Soto said, a standing course with dinosaurs and other crazy targets; and the walking range that’s open once a month where targets are fake deer and bear among others, and can be set up in various configurations.

The range was shutdown 90 days for the pandemic, Soto said, because they were unable to meet the initial state guidelines. The facility was built and is operated and maintained by the Sportsmen’s Association but the Department of Fish & Wildlife owns the land. The gun range is a concessionaire to the State.

“Since we’ve reopened,” Soto said, “there’s only been two or three days with the same numbers from prior to the shutdown. It’s record-breaking, crazy.” They had to open up another range so shooters could social distance.

So who uses the range? “On a weekly basis,” she said, “a third are not members. Before COVID we got a lot of foreigners, people traveling from L.A. to San Francisco. Some find us when they’re here, and others pre-arrange a visit.”

She added that when people come here from places like Germany, they want to shoot guns, “because they can’t where they live.”

One man from Amsterdam came in on his 50th birthday, she recalled. “He’d never even held a gun before. We let him use one of our educational guns. They all enjoy it. We’ve not had a single person not enjoy it.”

On Aug. 1, they will be hosting a fundraiser for the Boy Scouts, dividing into teams and shooting clay pigeons. There are 4-H groups who use the facility and they also hold “popgun night” just for kids. They can shoot .22s in competitions and win medals.

The Run On Guns

Yes, there’s a great shooting facility on Hwy 1, but if someone doesn’t have a gun and wants one, you might be out of luck.

“The hard part about buying a gun in California is that they just aren’t available,” Soto said. “There was a 370% increase in gun purchases just in May. It’s insane. It’s also really hard to find ammo right now.”

That’s a sentiment echoed by Colin Wiseman, who works at First Defense Firearms, a gun store in Los Osos located next door to the Post Office. Wiseman said with a smile, “It’s the same as it was with toilet paper. Since January or February, guns continue to sell like crazy. It’s going to be hard to get ahold of them.”

He said the store in Los Osos has seen lots of customers from out of town. People have driven up from Sherman Oaks, Encino, and Los Angeles, among other places.

“They come up here to buy from us,” Wiseman said, “because they aren’t available where they live. Seventy to 75 percent of them are first time gun buyers. It’s a whole new market of consumers; people who have never been in favor of guns.”

Wiseman added that the State is overwhelmed by the rush of background checks. “The waiting period is 10 days,” he explained, “but it was taking 20 days, they said, because they are half staffed [due to COVID-19]. At one point 4,000 to 5,000 guns a day were being sold in California. The most in one day was 10,000. And it’s not slowed down.”

He said even his dentist bought a gun. “He said ‘I want a shotgun,’” Wiseman said. “He was afraid of what’s going on. There’s been a lot of panic buying.”

The last time they saw such a run was after the massacre at Sandyhook Elementary School where a derange young man gunned down a room full of kindergartners. But that was for a different reason than today’s fears. Back then, “People thought President Obama was going to take away their guns.”

Wiseman said semi-auto, 9mm Glocks, a German made weapon that is the standard for most law enforcement, are very popular. They have a waiting list for a Glock that has 20 names on it. The infamous AR-15 rifle is also a popular model.

They also carry small caliber handguns (.22s) and an assortment of bolt-action hunting rifles but Wiseman noted, “There’s been no jump on hunting stuff.”

If readers want to know more about the San Luis Obispo Sportsmen’s Association gun range, see the website at: www.slosa.org.