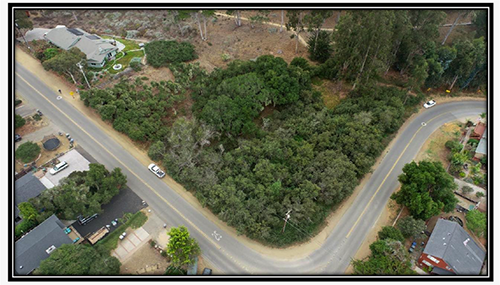 Nature lovers have a new reason to celebrate in Los Osos. The Morro Coast Audubon Society has purchased several parcels that will expand the Sweet Springs Nature Preserve.

The new, approximately one-acre, space is bounded by Pismo Avenue where it intersects with 3rd St, along Pismo to 4th, and up 4th to the house on the corner of Ramona.

“The Preserve,” Judy Neuhauser, president of the Morro Coast Audubon Society says, “offers sanctuary for wildlife of all kinds, resting areas for migrating birds, nesting and feeding habitat for local birds, places for endangered plants and animals to thrive, and a tranquil natural habitat for people to replenish their spirit and to observe and learn to love the local flora and fauna.”

The new parcels, referred to as the “Pismo Avenue Wetlands” are valuable willow thicket and pygmy Coast Live oak habitat that is presently under-represented in the Sweet Springs Nature Preserve.

Both habitat types are designated as Environmentally Sensitive Habitat, making them important targets for preservation along the coast of California. They provide rich surroundings not only for nesting species including Wilson’s warblers, California quail and California towhee at the Preserve, but also for migrating and wintering songbirds that use the thickets for resting and to find food among the oaks and willows in the form of caterpillars, other insects, and protein-rich pollen. Even resident deer are often seen entering the oak woodlands.

“There has been an informal path through this property for a number of years,” Neuhauser. “We closed it about eight months ago, with permission from the previous owner, when someone started cutting our ADA rope that guides sight-impaired visitors through Sweet Springs East. Once we have plantings and borders in place to direct people to the main Preserve and to keep people out of the environmentally sensitive areas of the new purchase, we will re-open that informal foot-path.”

The purchase of the lots at $250,000 was made possible by an “extremely generous” donation from community members Carole Maurer and John Dilworth.

“When someone like these two individuals makes a gift enabling the preservation of ecologically valuable land, it is a gift to everyone,” Neuhauser said. “Morro Coast Audubon is deeply grateful for their donation and community spirit, as well as for the decision on the part of Kathryn Donovan, owner of the parcels, to sell at a price that the Morro Coast Audubon Society could afford.”

MCAS will hold fundraisers and write grants to cover costs to remove and replace what the group laughingly refers to as the Frankenfence that would keep people out of the environmentally sensitive areas, remove the broken down gate on Pismo Avenue and replace it with a pedestrian stile, fund a new welcome sign explaining the purpose of the Preserve and remove invasive plant species while providing plant barriers to the areas that will be left entirely for wildlife use,

The Preserve is now a little over 33 acres stretching from the Coastal Access point on Doris Ave to 4th Street. The marsh area between the Doris Ave access and the platform at Broderson Avenue is completely off-limits to people since it is home to both the Savannah Sparrow, which has been endangered in California since 1974 due to habitat loss, as well as the endangered plant species salt-marsh bird’s beak and sueda Californica.

“There are pedestrian paths through the Sweet Springs Central parcel and Sweet Springs East has an ADA improved path suitable for wheelchairs and those with sight impairment,” Neuhauser said. “Numerous benches around the Preserve give people a place to quietly sit, watch what goes on in this Nature Preserve, and regain their own tranquility.

People frequent the Preserve to enjoy the bird watching platforms, relax on benches and traverse pedestrian paths. As beautiful as the surroundings are, it should be noted that the area is not meant to be a stomping ground for exercise enthusiasts or a playground for children; it remains a place for wildlife.

“We encourage quiet, reflective activities like photography, painting, bird watching, meditation, and allowing oneself to be immersed in the sounds, sights, smells and rhythms of this wonderful natural environment,” Neuhauser said. “While we do allow public access to the Preserve, it is with the idea that this is primarily a place where wildlife can thrive and go about their lives with minimal disturbance from humans. We feel strongly that people need to experience the wonder and tranquility of nature in order to love it and hopefully dedicate themselves to preserving what is left of Earth’s natural systems and wildlife.”

During the winter, the estuary is home to thousands of waterfowl that can be seen from the two viewing platforms. Raptors such as bald eagles, peregrine falcons, osprey, red-tailed and red-shouldered hawks, American kestrels, and coopers hawks are often seen from the Preserve. All together, over 220 species use the Preserve and at least 40 have been documented breeding in the Preserve.

“Our world has lost about one third of its birds over the past 50 years,” Neuhauser said. “We need to provide them spaces to live, rest, and breed — that is the main purpose of the Sweet Springs Nature Preserve.”

Maintaining the property of the Preserve comes with a price of about $40,000 per year, and the new fence is expected to come in at $3,000. The group also plans to grow the Lands Endowment so it is able to support maintenance of the Preserve in perpetuity. Morro Coast Audubon hopes donations will help pay for necessary projects. Readers can donate via their website: www.morrocoast audubon.org.

The Sweet Springs Nature Preserve is not done growing yet. There in one final small parcel embedded in the recent purchase that is undergoing negotiations for purchase. It will also be funded by the donation from Carole Maurer and John Dilworth.