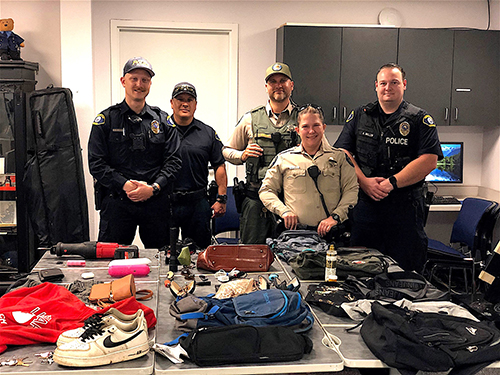 An off-duty Morro Bay police officer spotted a suspicious vehicle believed involved in a series of car break-ins at Montaña de Oro State Park, and resulting in the arrest of a teenage hooligan who was also wanted out of Lake County for the same type of crime.

According to an MBPD news release, beginning in mid May, State Park rangers saw a spike in vehicle burglary reports from visitors to Montaña de Oro. Park rangers began an investigation “to identify the vehicle associated to the burglaries and the subjects involved,” reads the news release.
Rangers obtained surveillance video of the vehicle they suspected of being involved in the cases and shared that information with area law enforcement agencies, including Morro Bay Police.

“On June 17, 2021,” reads the release, “an off-duty Morro Bay PD officer located the associated vehicle in Morro Bay and reported the finding to on-duty MBPD officers and State Park Rangers.”

The next day they traced the vehicle to an RV park located on Atascadero Road near Ironwood Avenue where they contacted a potential suspect, which MBPD investigators identified as a guy they too were investigating for a series of burglary and credit card fraud cases.
“Several items of stolen property were recovered from the RV,” according to police.

The suspect, a 14-year-old boy from Lake County, Calif., “had cut off his probation monitor and made his way to Morro Bay where he was staying with friends/relatives. The suspect was wanted out of Lake County on a no bail probation warrant,” police said.

The apparent juvenile delinquent was arrested for suspicion of burglary, possession of stolen property, fraudulent use of credit/debit card, and the outstanding warrant out of Lake County.” He was booked into the County Juvenile Hall.

Police said the investigation was ongoing to “identify other suspects involved with these crimes.”
Anyone who has any information regarding this incident is asked to call MBPD at (805) 772-6225 or Crime Stoppers at (805) 549-STOP.

← Previous: Hwy 1 at Bixby Bridge to Close Overnight City Attorney Got a Raise, Too →