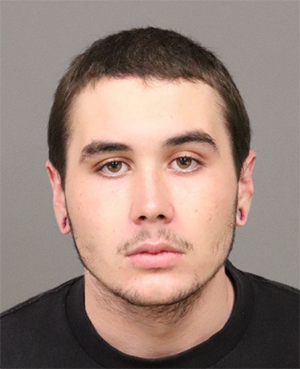 Sheriff’s deputies arrested a Templeton man on suspicion of committing a string of thefts in that North County town.
According to Sheriff’s spokeswoman Grace Norris, on Dec. 23 the Sheriff’s Office started getting a series of theft reports from Las Tablas Road, Hawley Street and Cayucos Avenue in Templeton. Deputies out of the North County Substation in Templeton investigated the cases and on Dec. 30 they interviewed a possible suspect, Cody Smith, 18 of Templeton.

Norris did not say why they zeroed in on Smith, who was on probation and subject to search.
“Smith was on active probation,” she said, “and was found to be in possession of several items of stolen property believed to be linked to the reported thefts.”

Smith was arrested and booked into the County Jail on suspicion of theft, possession of stolen property, and prowling.
Norris said the suspected stolen property has been returned to some of the victims, however, “Sheriff’s deputies are still working to identify the owners of some of the recovered property.”

Anyone with information related to this case, or who has yet to report a theft in the Templeton area within the time frame, is encouraged to contact the Sheriff’s Office at (805) 781-4550.