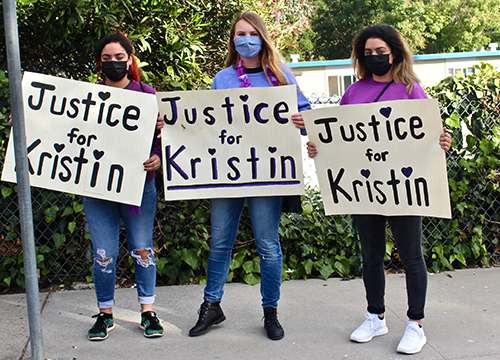 Purple ribbons tied to lampposts and street signs lined what is believed to be the last walk 19-year-old Kristin Smart took before disappearing 25 years ago on May 25, 1996.

About 100 people gathered to take that same walk in her memory. It started in a neighborhood at the corner of Foothill Boulevard and Crandall Way in San Luis Obispo and ended at Grand Avenue on Cal Poly campus across from Santa Lucia Hall where Smart was last seen.
Tessa Witkofsky, a chemistry junior at Cal Poly who wasn’t yet born when the crime occurred, organized the walk.

“We are doing this walk to raise awareness, keep Kristin’s name out in the public and to also show support to her family and to thank law enforcement for all that they are doing,” Witkofsky told Estero Bay News. “I think that cases get quiet when stuff is going on behind the scenes, people sometimes get nervous that nothing is happening. We are just here to keep her name out [there].”

Witkofsky said she first heard about Kristin Smart when she started attending Cal Poly three years ago.
“Being a college woman, it is a very relatable story,” she said. “It could have happened to anyone.”

Many of the people at the walk have followed the Smart case since it first got media attention in 1996.
“We’ve be involved in this for a really long time — 25 years,” said Robby Cervantes of Arroyo Grande, who at one time had a photo with information about Kristin on a race car he drove. “We had to come out here to show our support. It [the case] has been slow, but the new sheriff is doing his thing and making things come together. Now, hopefully, it will finish, and the family can have their time.”

Chris Lambert, producer of the 8-episode podcast “Your Own Backyard” that explores the Smart case, also took part in the walk. Many credit him with bringing new attention, evidence and witnesses that led to the arrests of Paul and Ruben Flores last April.

“When I took this walk in the beginning (for his podcast), it was insightful to get an idea of what it actually looked like as opposed to just reading it on a piece of paper,” Lambert said. “I hope that people who take the walk are able to put themselves in Kristin’s shoes and see the sights that she saw. I assume that there will be a number of people who are unaware of her story and will see a large group of people walking and ask questions.”
There will be at least one more episode to the popular podcast that has been downloaded more than 10 million times since first airing in September 2019, but Lambert said he isn’t sure how soon that will be.

“I will continue to work,” he said. “I have tons of new interviews that I haven’t shared yet. However it comes together, I’ll have a new episode out, and I will continue to follow it as long as it is still a story—until she is either found or there is justice in a court of law.”
For now, Lambert said it is all about Kristin.

“This week, in particular, has been about memorializing Kristin and remembering Kristin as a person without all the court stuff, all of that will play out over the summer. Right now the focus is just her.”

As reported in Estero Bay News in April of this year, Sheriff Ian Parkinson held a news briefing outside Cal Poly’s Orfalea Business School and announced that they had arrested Paul Flores, 44, at his home in San Pedro on suspicion that he murdered Smart. At the same time they arrested his father, Ruben Flores, 80, at his home in Arroyo Grande for suspicion of accessory to murder.

The Sheriff described Paul Flores as originally a “person of interest” in the case, then for years he was referred to as the “only suspect,” and finally just a few months ago, he was called the “prime suspect” in her disappearance. Her body has yet to be found.
Sheriff Parkinson, who was with the San Luis Obispo Police Department when Smart disappeared on May 26, 1996, rededicated the Sheriff’s Department to solving it after he was elected in 2011.

The Sheriff’s Department was brought in by Cal Poly Police fairly early in the investigation, after they were notified that Smart was missing on May 28, 1996, two days after she was last seen in Paul Flores’ company.

The beginning of the unraveling of this case started several years ago when the Sheriff’s Department along with the FBI conducted a search of the hillside behind the dorms at Cal Poly, near the famous “P” on the hill.
That search resulted in over 37 items of evidence being submitted for DNA testing; the results of which have never been divulged publicly.

Sheriff Parkinson said since he took office in January 2011, they’ve served 41 search warrants; conducted “physical evidence searches” at 16 separate locations; conducted a complete review of every item of physical evidence in the case and from all agencies involved.
They submitted 37 evidence items from the early days of the investigation for modern DNA testing. They’ve recovered 193 new items of evidence and conducted 137 person-to-person interviews, and written 513 “supplemental reports” in the case.
He said the case file has over 3 terabytes of information.

“My hope,” Sheriff Parkinson said, “is that we’re able to take this first step towards justice for the Smart Family.”
He added that the arrests were, “A bit of a relief but until we find Kristin this is not over.”
The Sheriff revealed that they have had Paul Flores under electronic surveillance — email, texts and cell phone calls — since 2019. Last February, they simultaneously served search warrants at Paul Flores’ home in San Pedro, as well as his mother’s and his father’s Arroyo Grande homes and that of his sister.

In April 2020 they served search warrants at Paul Flores’ home and “recovered evidence related to the murder of Kristin Smart.”
In March of this year, search warrants were served with Sheriff’s investigators using cadaver dogs and ground penetrating radar, even cutting up a concrete slab at Ruben Flores’ home. Still, they have not found her remains, but the Sheriff said they will continue to look for her.

The Sheriff said that forensic physical evidence was located at two of the homes they’ve searched that were “linked to Kristin Smart.” Asked whether he thought the mother, Susan Flores, was involved, he said, “It’s not what you believe, it’s what you can prove.”
As for the podcast, Sheriff Parkinson said Lambert had taken a local story and expanded it nationwide and internationally too. “Once it came out,” he said, “we started getting new information.” He said the podcast “produced information that was valuable.”
He said Denise Smart, Kristin’s mother has described the case as “a puzzle” with missing pieces. “This has been a puzzle,” he said, “and it’s been a very slow process to discover those pieces.”

A preliminary hearing for Paul and Ruben Flores for a judge to determine if there is enough evidence to move forward with the case is set to begin July 6. It’s expected to take 12 days and will be an opportunity for both sides to present their cases.

Individuals with any information are encouraged to contact Crime Stoppers at (805) 549-7867 or online at: www.slotips.org.
Estero Bay News reporter, Neil Farrell,
contributed to this story.