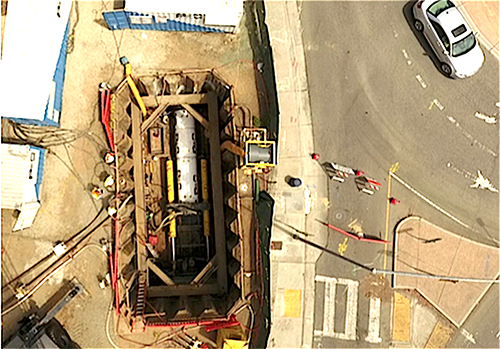 A massive tunneling job to route the pipes underneath the roundabout in Morro Bay as part of the Water Reclamation Facility project has a new problem to deal with.

Work on laying the 3.5 miles of conveyance pipelines started out with a classic Murphy’s Law situation, i.e. anything that can go wrong will go wrong, after the contractor, Anvil of San Francisco, burst a water main on their first day of excavating at Quintana Road and La Loma Street, followed that same day by a break in a by-pass sewer main they’d installed aboveground, along Quintana Road through their construction zone.

Now, the massive tunneling job to route the pipes underneath the roundabout has hit a unforeseen snag.
“The micro-tunnel boring machine [MTBM] is currently stopped just short of the community garden,” said Paul Amico, the project manager for Carollo Engineers on the pipe portion of the WRF.

“During the first week of August,” Amico explained, “the contractor encountered ground conditions that greatly slowed forward movement of the MTBM and were unlike any condition they had experienced up to that point. They attempted to advance the MTBM, but determined that continuing to move it forward could risk damaging it, which as you can imagine is a very undesirable and unacceptable situation for everyone.”

That subcontractor, Vadnais Trenchless, was hired by Anvil to complete the 5-foot diameter tunnel being bored under the roundabout from the site of a former U-Haul store to Las Tunas Avenue on the other side of the Morro Bay Coffee Co.

The boring machine they brought in is the largest they have and sits at the bottom of a 35-foot deep hole. The plan is to bore the tunnel and simultaneously push a 5-foot diameter steel piping — in 20-foot segments that are welded together — into the tunnel as the boring machine grinds up and removes the soil, thereby laying the casing as you go.

Another hole, 30-feet deep on Las Tunas, is where the tunnel will eventually break through to re-connect the sewer pipes running out Quintana to the new treatment plant above South Bay Boulevard and Hwy 1. The conveyance system is a $31 million contract.

The tunneling method was chosen in order to minimize traffic flow at one of the town’s busiest intersections that traditional trenching would require and because the roundabout has a “spider web” of utilities that run underneath it, according to Amico, who gave a reporter a tour of the operation for a story in EBN’s last issue.

Anvil and Vadnais have been trying to figure out what’s hindering the tunneling operation. “Anvil excavated a shaft in front of the machine,” Amico said, “to determine what condition might be stopping forward progress, and that process took about 4 weeks due to the depth of the MTBM and the soil conditions where it was located.

“They were able to get the MTBM moving again on August 30,” Amico added, “and on September 1 they began observing a similar condition as before, so tunneling operations were again stopped.”

The companies have submitted a “contingency plan” of attack.

“Since that time,” Amico said, “Anvil has excavated another shaft in front of the MTBM, and they are in the process of determining what might be stopping forward progress and to also inspect the cutting head to determine if there may be a mechanical issue with the MTBM.”

Amico said on Sept. 14 that the second discovery hole had been dug and Anvil was putting in shoring to stabilize the sides, so they can safely go down and scope out the problem. “We hope that they will wrap this up this week,” Amico said, “and get moving again, but the exact timing will depend on what they find when they are able to put eyes on the cutting head.”

As for what’s all this going to cost? City Manager Scott Collins said, “At this point, it’s still under investigation as to cause. I anticipate it will be a large cost, but who will bear that cost is not yet determined.”

So what is blocking the boring machine’s progress? Amico said they didn’t encounter any big rocks or a layer of granite, which could have been possible given that the area is on the flanks of Black Mountain, an extinct volcano.

So whatever is slowing down the tunneling awaits discovery and potentially Mr. Murphy’s continued involvement.

If readers have questions about the WRF project, they can email or call Carollo’s PR team at: wrfinfo@morrobayca.gov or 877-MORROBAYH2O and a team member will get back to you within one business day, according to Carollo’s pronouncements to the public.