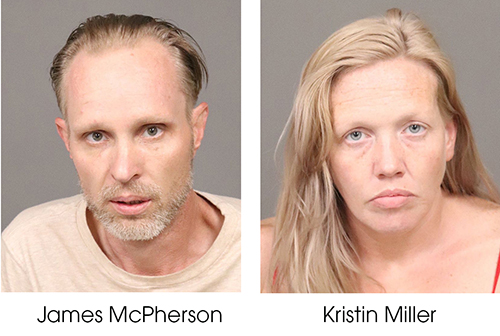 “When Deputies arrived,” Cipolla said, “they noticed the front glass door to the business was shattered. Surveillance video also revealed a male suspect smashing jewelry cases with a hammer.”

The thief left behind a valuable piece of evidence. “That hammer was later found at the business and was collected as evidence,” Cipolla said. “The video showed the suspect taking a large amount of jewelry from the smashed cases. The loss was estimated at more than $250,000.”

Detectives were able to identify two suspects from the evidence left at the scene, Cipolla said. They were: Kristin Miller, 39 and James McPherson, 46. Both are described as transients with no known addresses but believed to be from Santa Clara County.

On April 18, Cipolla said, the San Jose Police Department caught up to Miller and arrested her. Then on April 25, the Santa Clara County Sheriff’s Department arrested McPherson.

“Both were transported to the San Luis Obispo County Jail,” Cipolla said, “where they are facing charges of commercial burglary, receiving stolen property, conspiracy to commit burglary and other theft related charges.”