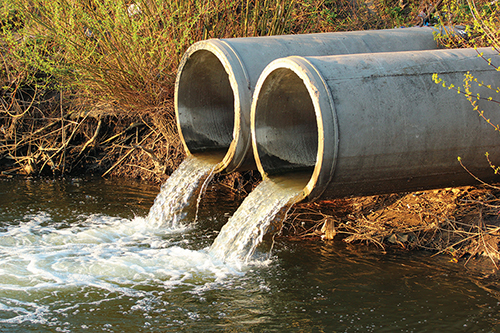 With the apparent early onslaught last week of rainy weather, the County is advising people to avoid ocean waters — and in Morro Bay’s case, bay waters — for at least a few days after significant rains to give potential pollutants time to clear out.

The warning came out on Nov. 8, just as the first major storm of the new rainy season was coming into the area. That 2-day storm would dump nearly an inch of rain in Morro Bay, as measured at Morro Bay’s Harbor Street Firehouse.

While all rainstorms wash pollutants into the ocean and waterways via storm drains and road runoff, it’s the first, big drenching of rain that produces the most concern.

All manner of pollutants — road grime, brake dust and dirt, along with microscopic organisms — built-up on the streets after months of dry skies, gets washed into storm drains, which empty into creeks, rivers, bayas and ultimately, the ocean.

Same goes for the local hills, which are used for cattle grazing. Manure too gets washed into waterways.

“Rainstorm runoff,” the County said, “is known to transport high levels of disease-causing organisms such as bacteria, viruses and protozoa from the watershed and urban areas to the ocean.”

There’s a myriad of ailments possible with these pollutants. “Such organisms carried into the ocean can cause skin, respiratory, and intestinal problems. Young children, older adults, and people with compromised immune systems are especially vulnerable to these waterborne pathogens.”

The warning goes out to all ocean and bay users. “Surfers, swimmers and others are advised to avoid contact with ocean water during this period,” the release cautioned, “especially in areas close to creeks, rivers, storm drains and other runoff outlets that empty into the ocean.”

In Morro Bay, there are about 30 storm drains along the Embarcadero that empty directly into the bay.

Also, the Health Department issued a warning against eating shellfish — oysters, mussels, clams — caught in the same waters to avoid “paralytic shellfish poisoning” or PSP. Shellfish that are farmed or imported should be OK, so long as one is not allergic.

“Dangerous levels of paralytic shellfish poisoning (PSP) toxins have been detected in mussels from Humboldt and San Luis Obispo counties,” County Health said in an Oct. 28 news release. “The naturally occurring PSP toxins can cause illness or death in humans. Cooking does not destroy the toxin.

“The California Department of Public Health [CDPH] is advising consumers not to eat sport-harvested mussels, clams, or scallops from Humboldt and San Luis Obispo Counties.”

Such mussel “quarantines” are routine during the advent of winter weather. “The annual quarantine applies to all species of mussels harvested for human consumption along the California Coast, as well as all bays and estuaries.”

However, “This warning does not apply to commercially sold clams, mussels, scallops, or oysters from approved sources,” the release said. “State law permits only state-certified commercial shellfish harvesters or dealers to sell these products. Shellfish sold by certified harvesters and dealers are subject to frequent mandatory testing to monitor for toxins.”

If readers do accidently eat contaminated shellfish, it won’t take long to realize it — PSP is deadly.

“PSP toxins affect the central nervous system,” the County said, “producing a tingling around the mouth and fingertips within a few minutes to a few hours after eating toxic shellfish. These symptoms are typically followed by loss of balance, lack of muscular coordination, slurred speech, and difficulty swallowing.

“In severe poisonings, complete muscular paralysis and death from asphyxiation can occur.”

The State Health Department has online resources, if readers want to track the issue and find out when it’s safe to eat shellfish again.

You can get the most current information on shellfish advisories and quarantines by calling California Department of Public Health’s toll-free “Shellfish Information Line” at: (800) 553-4133.