Whale Washed up Near Cayucos 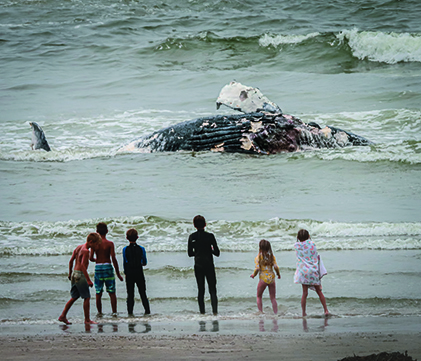 The carcass of a humpback whale that washed up on shore on July 9 at Montecito Beach south of Cayucos was buried in the sand two days later.

Beach-goers reported the whale appeared to have bite marks on it and pieces of flesh missing, which could be from a killer whale known to go after juvenile humpbacks. The National Oceanic and Atmospheric Administration collected data, but reports were not available before press time.

State Parks and California Fish and Wildlife investigated the dead mammal as well and had to determine what to do with the 15-foot carcass.

There were three options that were considered, said State Parks District Superintendent Dan Falat. “Burying it on the beach, towing it off shore or hauling it off the beach. We determined that that burying the whale on the beach was the best course of action. That was completed yesterday afternoon.”

Falat said the remainder of the whale was buried in an approximately 10-foot deep hole. Photo by Danna Dykstra-Coy