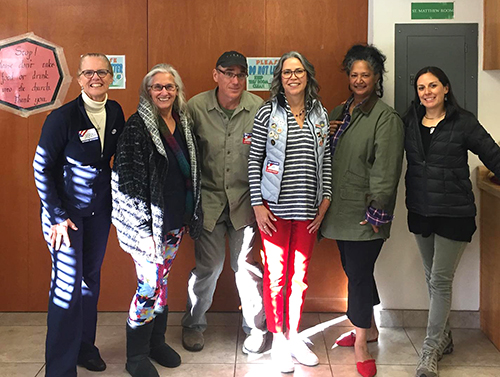 In August of 1920 the 19th Amendment to the Constitution was ratified, guaranteeing and protecting women’s constitutional right to vote for the first time in American history. It is fitting that 100 years later a women’s organization will hold a vital role in safeguarding the democratic process here on the North Coast.

The South Bay Women’s Network will once again operate a Voter Services Center for the General Election — the only one in Los Osos. In 2016, there were 7 polling locations in Los Osos.

“We’re really excited,” said Gila Zak, South Bay Women’s Network (SBWN) chairperson. “It’s the hundredth year of the passage of the suffrage legislation for women’s vote. We are here to support our community of women and everyone, regardless of gender identity.”

The number of polling places has declined this year due to COVID-19 situation and the expected massive increase in vote-by-mail ballots.

Whatever you political affiliation, many people believe that this is the most important election of our lifetimes. Citizens are expected to vote in record numbers despite being in the midst of the coronavirus pandemic.
“People oftentimes feel powerless, and our vote is our power,” Zak said. “It doesn’t matter where you are on the political spectrum, everyone deserves the opportunity to exercise that power. It’s a right not given to everyone around the world or even in this country.”

The end of the article has a list of voting centers as well of a list of vote-by-mail drop off locations. Safety precautions will be in place.

Since 1983, the SBWN has worked with women to network, promote and support one another to achieve professional and personal goals.

One way they do that is through annual scholarships to Cuesta College re-entry, female students.
The decision to award scholarships within those parameters is based on the inspiration of women in the organization in the past who became entrepreneurs, solopreneurs or were able to employ themselves or their families because of going back to Cuesta after they’ve had to take a break for whatever reason.

“We started a scholarship fund just to help other people like that,” Zak said. “Sometimes they come from a history of drug abuse, and they become clean and sober. Sometimes, they’ve had to drop out of school because they got pregnant. Very often they be end up in an abusive relationship and have to leave school. And so when they find their feet again it’s just a wonderful way to say, “Hey we believe in you.’”

One of the funding sources for those scholarships is the stipend or hourly wages people earn from the County by working at the polling stations.

“We do it, not only because we want to be civic minded, but because we get paid and then we can use that as part of our fundraising arm for the scholarship,” said Zak who has volunteered her time for the past 12 elections. “It generally runs around $600. This year, because of the four days that are involved and the extra staff that we’re going to need, we stand to make around $5,000 for the scholarship. That is typically what we raise in an entire year over different types of fundraising. If we can start out with that, then we can just offer more scholarships and help to procure that endowment that we’re trying to make.”

SBWN needed to fill about 70 slots at the voting site this year and are nearly there thanks to the number of folks who stepped up to help out. To be clear, people are not required to donate their earnings to the organization’s scholarships.
For future scholarship opportunities for a Cuesta College female re-entry student, visit www.SBWN.org under the “About SBWN” tab. The application process has closed currently, but Zak said there is a possibility it will be extended. If not, it will return next year.

The South Bay Women’s Network is open to all women of all job levels and in every occupation. It offers an opportunity to meet with other interesting women, to share ideas, build friendships, and exchange support needed for growth on a professional and personal level.

Monthly dinner get togethers are currently on hold, but for more information about joining the organization visit SBWM.org/membership/ and fill out an application.

Through Election Day, Nov. 3 at 8 p.m., mail-in ballots can be delivered to any Drop Off location or Voter Service Center during hours of operation.
You may vote in person at any Voter Service Center beginning October 31.
Drop Off Vote-By-Mail Ballot
Cambria Library
1043 Main St
Tue-Sat: 10 a.m. – 5 p.m.
24/7 Book Drop