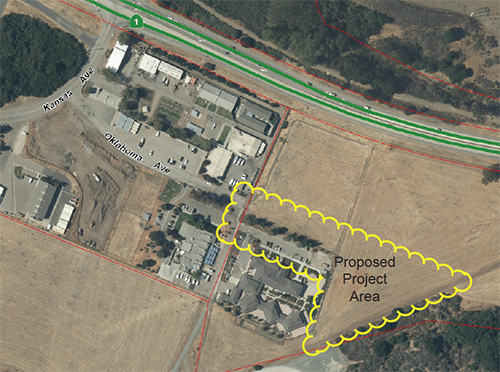 The County has started building a new home for wayward critters in a project that will for the first time use a new method of contracting for public facilities.

County Public Works broke ground on the new home of the Department of Animal Services last week and expects to be completed with the project in February 2022.

The animal shelter is being built on vacant land the County owns adjacent to the Woods Humane Society’s shelter on Oklahoma Avenue.

It will be sandwiched in between Woods and a new 1.2-megawatt solar farm the County recently installed that will cut electrical costs for the new animal shelter, as well as County facilities like the Honor Farm and County Jail complex, among others in the area.
“When complete,” reads a news release from Public Works, “the new 16,000 square foot facility, associated infrastructure, parking, and landscaping will replace the 43-year-old facility currently operated by Animal Services.

“It will provide an appropriate environment for the care of animals and for families to find their new pet(s). The new facility is being developed under a partnership between the County of San Luis Obispo and all seven incorporated cities within the County.”
The contractor for the job is F&H Construction of Lodi, Calif., and this is the first project to be delivered by the County using the “Design-Build” project delivery method. F&H Const., was awarded a $15.2 million contract last May.

The contract award included a budget adjustment up to $20.3 million for the overall project, up from the original $13-million estimate. Add in financing costs of $326,000 and the grand total topped $20.6 million as of last May.

All the cities in SLO County contract with the County for animal services including animal welfare law enforcement duties and will split the costs for the new shelter based on how much each city contributes to the animal overpopulation problem, i.e. the number of captured dogs and cats that come into the shelter.

But County Supervisors voted to take on an additional $1 million of the costs above the pro rata share in order to bring some rogue cities like Paso Robles, Atascadero and Arroyo Grande — back into the joint powers agreement, after they voted to investigate building their own shelters. But they all eventually realized building and operating a separate animal shelter was too expensive.
Last May, County Administrative Officer Wade Horton said in a news release, “This project shows how our local governments can come together to meet a community need. We don’t need an extravagant facility, but one that will serve all communities in SLO County well into the future.”

If readers want to track the project go to: www.slocounty.ca.gov/AnimalFacilitiesProject.