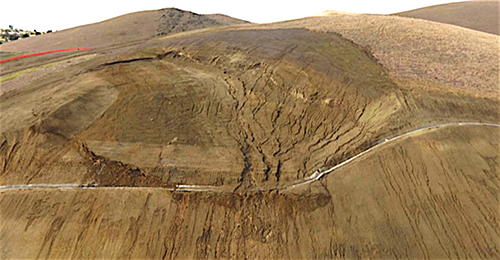 This aerial photo shows a landslide at the site of Morro Bay’s sewer treatment plant project taken shortly after the event in May 2020. Photo by City of Morro Bay

Unstable land at the site of Morro Bay’s new sewer treatment plant is costing an avalanche of money, with the costs so far topping $1 million.

According to City Manager Scott Collins, the first landslide, which occurred in May 2020, cost $280,000 to remediate and a more recent slide in the same area has now topped $850,000, bringing the total to over $1.13 million.

These figures are what remediating the slides is costing the City, according to Collins, as the project team has whittled at the original bills from the contractors — a partnership between Filanc and Black & Veatch.

“The WRF team worked hard to reduce the City’s total financial liability on this,” Collins told Estero Bay News. “I think the original claim from the construction team was nearly $200,000 more than where we eventually landed.”

The landslide is one of a number issues that have forced the overall project to climb from an original $126 million — the amount used in a 2018 Prop. 218 vote of ratepayers — to now over $145 million.

“The project,” Collins said, “certainly has had some unanticipated costs like the abovementioned landslides, but it is important to note that they will not impact our customers’ water and sewer rates.”

That’s because the City has gotten two very-low interest rate loans from both Federal and State Government agencies to finance the project, with extra costs being absorbed through the project’s contingency funds.

And the costs could keep coming. A footnote regarding the materials costs reads, “Prelim information for estimating purposes include excavating and backfilling in-situ material approximately 19,000 cubic yards plus 12% swell and shrinkage. It does not include any material hauling to and from the canyon.”

On another note, many in the community have been distressed at the number of trees that have been removed along a dedicated bike path, which runs between the highway and the power plant’s outer fence.

Driving past on Highway 1, there’re noticeable gaps in what used to be a wall of cypress trees screening the roadway.

Some have said the City has taken many more trees out than it listed in the environmental impact report and thus are violating the permit from the Coastal Commission. Collins and the City denied doing anything wrong.

“With regard to trees,” Collins said, “we followed guidance from the Coastal Commission. We submitted plans to the Coastal staff with the trees that needed to be removed to safely place the pipeline in near the bike path.”

He said the commission signed off on the plans. “They reviewed and approved those plans,” Collins said. “I believe the total number of trees removed to date is around 36.”

The City isn’t apparently the only ones taking down trees. “Unrelated to the WRF project,” Collins said, “I believe Vistra and PG&E have also removed some trees in that area recently.”

Even more trees will probably have to be chopped down. “We likely will need to remove more trees,” Collins said, “and would need to get Coastal staff approval to do so.”

Concerned residents should note that the City plans to replace the trees. “City Council directed staff to create a plan to plant new trees to make up for these removed trees,” he said. “That plan will be developed by staff and shared with the Public Works Advisory Board, and other commissions potentially, before coming back to Council for review.”

Collins said that process would likely be done sometime next year.

The City Municipal Code, Chapter 12.08.070, which regulates tree removals in the public right of way, includes the following: “…the tree shall then be removed and a new tree planted in the same location or in close proximity to the location where the tree was removed.”

So according to its own laws, the City will have to plant new trees along the bike path and anywhere else they might be removed. The plan being developed for this, will also have to choose the species of trees that are planted, chosen off a City-approved list.

The trees along the bike path are mainly cypress, which is the City’s “official” tree species.