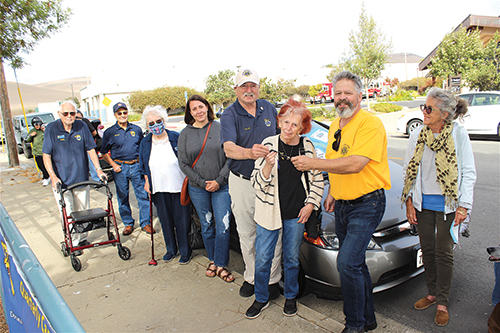 The Morro Bay Lion’s Club gave away the 34th vehicle in its quarterly car giveaway program.

Bill Todd, owner of Todd’s Garage and Lion’s Club treasurer, said the 2008 Honda Civic was donated to the program by his nephew Dan Todd’s fiancé, Gina of Van Nuys, Calif. She’d bought a new car, Todd said, heard about the Lion’s program and donated it to the cause rather than trade it in.

The car was given to Vivian Levy in recognition of her many contributions to the community.

The program was begun by Bill Todd and Sharon O’Leary of the Morro Bay Community Resources Center, who sought out people who’ve made significant contributions to their community and were in need of reliable transportation.

The program accepts donations of vehicles that people don’t want or no longer have a need for. The reasons to make the tax deductible donations vary from a death in the family, to a new vehicle, to folks who’ve gotten too old and are no longer allowed to drive.

They will also accept donated vehicles that aren’t running, as they can be sold for scrap and the money used on cars to be given away.

The Lion’s Club Foundation embraced the program and has helped coordinate the giveaways.

Todd said at the garage, he and son Mike Todd, go through the donated vehicles to check the mechanics, fix anything that’s wrong, do a 60-point safety inspection, and give it a smog check.

The recipients must insure the vehicle and pay future licensing costs.

Recipients are chosen from a list of applicants, screened by a committee, and then if chosen are presented the keys usually at a public ceremony. Levy received her Civic at the conclusion of Morro Bay’s 150th Anniversary celebration on Sept. 11.

If readers have a vehicle they no longer need and would like to donate, or would like to receive a vehicle, call O’Leary at (805) 225-1991. They accept cash donations as well in order to purchase needed parts for a donated vehicle.

In the photo here, Vivian Levy takes the car keys from Bill Todd (right of Levy) with O’Leary at far right. And that’s Lion’s Club President Chuck Stoll just to the left of Levy. Also shown are Lion’s Club members that were on hand for the event.