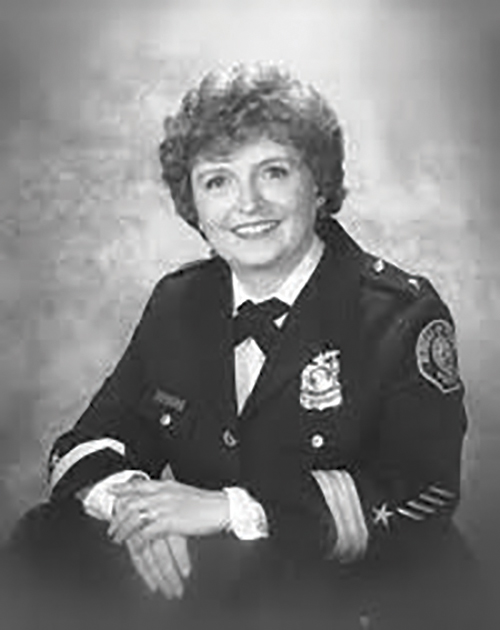 Penny Eileen Ledyard was born on March 3, 1942 in Lansing, Mich., the oldest of four children. For “Career Day” in high school, Ms. Harrington shadowed a woman on the police force and was captivated by the idea of becoming an officer. She majored in police administration at Michigan State University.

Upon graduation, she and her husband moved to Oregon. She was hired in 1964 by the Portland Police Bureau in the Women’s Protective Division.

What followed were a series of firsts. She was the first woman officer in Portland to become a detective, a sergeant, a lieutenant, a captain, and chief in 1985, becoming the first woman to lead a big city police department.

“Ms. Magazine” named her “Woman of the Year;” and Harvard Law School named her one of the 10 most influential women in law in 1986.

She was forced to resign 17-months later due to a dispiriting struggle with what she called the “boys-only club,” including criticism from journalists and the Portland Police Officers Association.

In her own words, “I went from being a celebrity to a pariah. I opened many doors to policing for women, only to have them slammed shut in my face.”

Harrington caused significant changes as she persisted her way up the ladder. For example, female officers had to wear “ladylike” attire, including white gloves, and were required to have a college degree. Men needed only a high school diploma or equivalent, yet made more money. She slowly managed to equalize pay, filing 42 complaints from 1975 to 1978.

Of equal note, Harrington persuaded the Portland City Council to change the job classification of “patrolman” to “police officer.” More than semantics, this meant that exams for detectives that had been open only to “patrolmen” were now open to “police officers,” which included women.

Upon her resignation, Harrington said, ‘’the entire goal of my administration has been to move from a militaristic, rule-driven organization to one that operates in a value-based, participatory style.’’

She pioneered neighborhood policing and reduced the burglary rate. She emphasized new policies on de-escalating violence and controlling the use of force. Her belief was that a good police chief always answered first and foremost to the community. She knew her goals were succeeding during her tenure.

Two years later, Harrington was hired by the California State Bar Association as Special Assistant to the Director of Investigations. Over seven years she developed an expertise in gender and racial discrimination law and leveraged her experience to become one of the nation’s foremost experts on women in policing.

In 1995, through the Los Angeles-based Feminist Majority, she founded the National Center for Women and Policing. She consulted dozens of police departments on hiring women and served as an expert witness in gender and race discrimination cases.

After her retirement to Morro Bay in 2001, she was contacted regularly by law enforcement, reporters, journalists, authors, and legislators seeking her expert opinion and advice.

The stressful nature of Ms. Harrington’s work led her to a path of holistic healing. She became a Reiki Master teacher, a color therapist, and a crystal healer. In 2010, she opened the store “Ruby Dragon” on Shasta Avenue in Morro Bay.

Four-years later, she moved to a larger space on Main Street, where she expanded her rock and crystal offerings, as well as event space until the shop closed in 2020.

Ms. Harrington is survived by her sister Roberta Webber and her granddaughter Aine. Her son, Brian Orazetti, preceded her in death in 2015.

Read her memoir, “Triumph of the Spirit,” published in 1999.