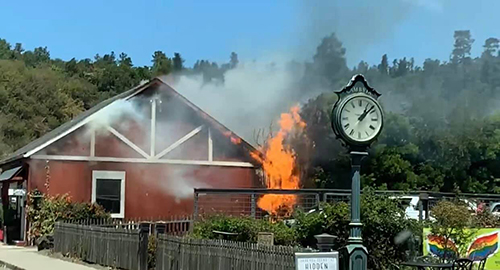 A Matter of Taste in Cambria was destroyed during a fire on Aug. 1. Photo by Jerry Rodriguez

The skies in Cambria darkened on August 1 when a fire erupted at A Matter of Taste, a local business in the East Village. A vehicle had slammed into the building, shearing the gas line causing the shop to burst into flames. One employee and a few customers managed to get out in time and there were no injuries. But, the building itself was destroyed.

A Matter of Taste, owned by partners Gayle Jenkins and Mark Morris, was located on the corner of Main and Burton. It’s an iconic kitchen store specializing in cookware, foods and specialty items. In 2019 the Cambria Chamber of Commerce named the shop “Business of the Year.”

Fortunately the shop was insured, however it is the insurance that has put the shop’s fate on hold. “They said it could take up to two years to figure it all out,” says Gayle. “We have received money for the loss of the business but not the inventory. It will be a while.”.

Locals have been concerned about the fate of the business. Fire department officials red-tagged the structure, making it uninhabitable. Sept. 4 was the first day Gayle and Mark had been able to get inside the building that is being prepared for demolition.

“We thought we would just see if anything was salvageable,” Gayle said. “I was hoping to find my grandmother’s needlepoint frames and perhaps the computer, register, anything. But it was so much worse than we expected. It is a complete and total loss; the only thing I could grab was a cast iron pan.”

This was not the first time the building at 4120 Burton Dr. has been damaged. When Mike and Sally Thompson had the business several years ago, it was also hit by a car at least once. And since Gayle and Mark have owned it, there have been two other accidents — just a month before a car went thru the side of The French Corner Bakery that sits across the parking lot from A Matter of Taste. So, the location does have its challenges.

“But those were events we could clean up and move on from,” said Gayle. “This is different, everything is gone.” However, they are optimistic about the future. There has been a great deal of community support. “We have heard from so many of our customers, our friends and family. We have been overwhelmed by the generosity, of not just Cambrians, but visitors who have written to tell us that shopping at A Matter of Taste was a family tradition. We are so blessed by the prayers and good wishes. It’s what keeps us going.”

Gayle insists they will keep going. They have been encouraged to rebuild, but in a new location. “We would like to stay in the East Village if we can,” she said. “This is a blank canvas for us now. We can expand and rebuild just the way we want it. We would like to grow into more than just kitchenware, possibly home décor as well.”

Currently there are two GoFundMe pages set up to assist with relocating A Matter of Taste. “We are so appreciative of our community. We will be back bigger and better,” said Gayle.