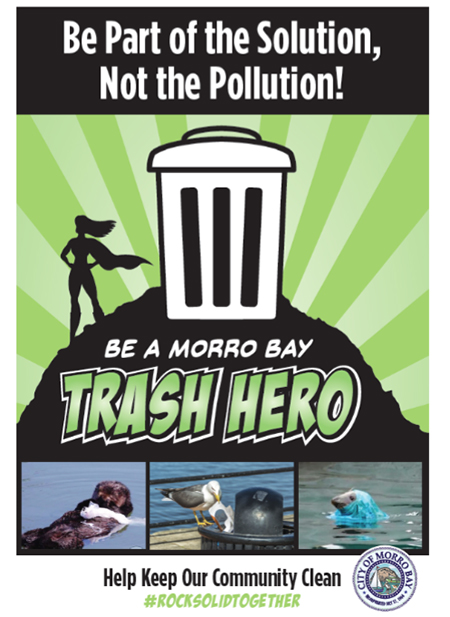 The City of Morro Bay wants people to “Be a Trash Hero” to help combat the growing problem of excessive trash being generated by increased takeout orders at restaurants on the Embarcadero and other areas of town.

First Morro Bay residents and visitors were urged to “Be a Face Mask Hero” and help fight the coronavirus pandemic by wearing a facemask. Now, the City is asking people to become heroes by picking up trash that’s being strewn about by birds and litterbugs.

Jennifer Callaway, the City’s public information officer, said, “The City recently launched the ‘Be A Face Mask Hero’ Campaign to align with the State of California’s statewide mask order and highlight the importance of wearing masks to combat the spread of COVID-19.

“The campaign has been very successful,” Callaway said, “as the City continues to see increased compliance with face covering usage. The City is now launching its second leg of the Hero Campaign series, ‘Be a Trash Hero.’”

Since mid-June when the State eased up a bit on its pandemic response and allowed some non-essential businesses, in particular restaurants, to reopen but not allowing them to use their dinning rooms.

That’s led to most of the nearly 50 restaurants in Morro Bay scrambling to make the new restrictions work, by offering takeout, curbside and home delivery, as well as setting up outdoor seating areas in parking lots, on sidewalks, plazas and patios.

It’s isn’t likely to be enough for many restaurants to survive for too much longer, but it’s allowed them to do some business. It’s also come with an unintended consequence.

Several volunteers have stepped up to pitch in, “and the City is very grateful for its committed and dedicated volunteer base that routinely assists staff with trash removal and cleanup,” Callaway said.

There remain several areas in town with overflowing trash cans where the trash keeps piling up, helped in large part to scavenging seagulls that pick through trash cans, pulling garbage out for whatever tidbits they can find, and leaving it on the ground to be scattered by the wind.

“We often forget,” Callaway said, “as a coastal community, that seagulls and other birds tend to pick up trash next to receptacles or pull out trash and carry it throughout the city if not fully thrown away.

“When this happens, trash and debris can end up in our bay, negatively impacting the marine life we all cherish and love to observe.”

The PR campaign “is focused on encouraging our visitors to respect our beautiful community and delicate bay, this place that they enjoy visiting and spending time in, by helping to be part of the solution, not the pollution, by properly disposing all trash and recyclables,” Callaway said.

Trash Hero signs and feather banners are being placed along the waterfront and Main Street, Callaway said, “to help communicate the message and ask visitors for their support and participation.”

And there could be rewards in it for trash heroes. “Just as with the City’s Face Mask Hero Campaign,” Callaway said, “City staff will be handing out swag items such as T-shirts and hats to visitors and residents that they see going above and beyond, picking up trash and helping to protect the bay — truly being part of the solution, not the pollution.”

Callaway said this won’t be the last part of the City’s Heroes Campaign. “Additional components of the City’s Hero Campaign will be rolled out in weeks to come as the City acknowledges our local businesses that have stayed the course and persevered during this constantly changing and uncertain times, as well as local volunteer heroes and the City employee heroes who continue to provide a high level of service to our community despite reduced staffing and COVID challenges.”

← Previous: Technically Speaking A Matter of Taste Will Return → 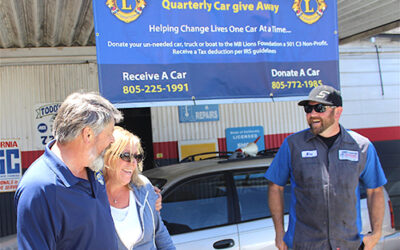