A Visit from The Cannabis King 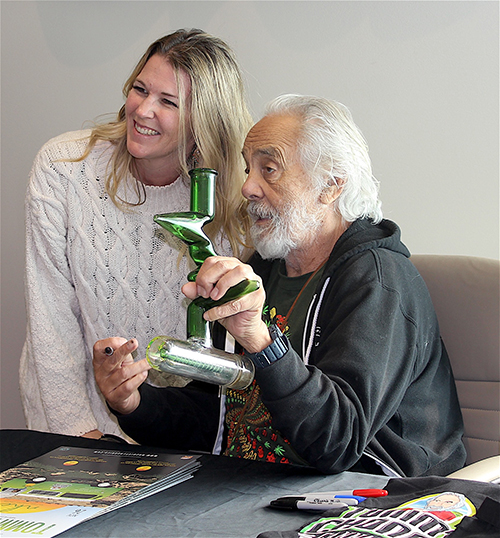 He’s gone from being an icon of the hippie, peace-love-dope generation to now a corporate CEO, but comedian Tommy Chong is right at home doing what he’s been doing all his life.

Chong starred along with comedic partner, Cheech Marin in such 1970s-80s classic comedy films as “Up in Smoke,” and “Cheech & Chong’s Next Movie,” plus mega-selling comedic albums — like Big Bamboo, and Los Cochinos and now is the head of a major cannabis company, specializing in both CBD products and the evil weed.

Still very much the stereotypical hippie stoner, Chong, now 83-years young, was in Morro Bay last week for a special appearance at the Natural Healing Center’s dispensary on Morro Bay Boulevard.
And judging from the over 300 people who stood in line for the chance to meet the man who made smoking pot cool, he’s as popular as ever.

Chong, who was born in Canada, took a few minutes away from signing autographs and posing for photos to answer a few quick questions from an Estero Bay News reporter.

Asked if Tommy Chong’s Cannabis was a new company for him, he replied that it was “relatively new. I’ve been doing this all my life [advocating for marijuana legalization] and after I got out of prison, we started to do cannabis.”
He explained that he got into the medical marijuana scene in the mid-1990s after California legalized medicinal use of cannabis (“marijuana,” “pot” or “weed” to us older folks). For many years he sold paraphernalia through classified ads in publications like High Times and over the Internet.

In 2003 he pled guilty to selling paraphernalia on the Internet through a family-owned company — Nice Dreams Enterprises — “Nice Dreams” was also the name of a 1981 Cheech & Chong movie. That October he started serving a 9-month prison sentence at the Taft Correctional Institution, a federal prison.

He said in 2005, after he got out of prison, they started with the full line of CBD products, in what could be called a bit of nose-thumbing at the man.

They started with the THC cannabis about 2-years ago, he said, after California legalized recreational pot use with Proposition 64.
“We’re going crazy with the CBD sales,” he said, “and we pushed up into the big money thing” his line of Tommy Chong Cannabis.
Asked if he ever thought he’d become “the Man” that he used to mock, Chong grinned and said, “I never thought I’d be a CEO. I never thought I’d go to jail either though.”

Asked if he and his partner in comedy Marin would ever do another movie or album, he said, “This is it. I donate all my time and energy to it.”
He lowered his voice to a whisper and said the next thing for Cheech & Chong will be ringing the opening bell at the Stock Exchange.

Yes, the old hippies and counter culture icons are going public with what is now a $50 million company. But for the hundreds of fans who lined up in Morro Bay and later the same day at nhc’s Grover Beach dispensary, he’s still that guy who famously said, “Dave’s not here, man.”