Around the Track and Then Some 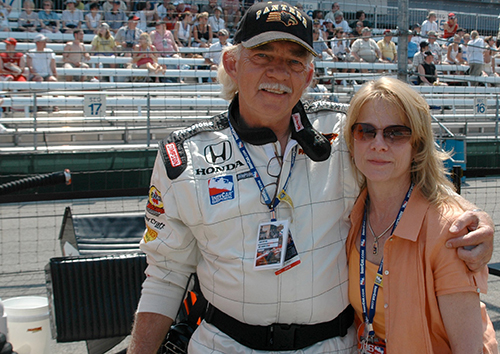 Mike Griffin and his wife, Jacque, at the Indianapolis Motor Speedway during the Panther Racing Team days in 2006.

No matter the crowd size at any social gathering, when Mike Griffin enters and says “Hey, how ya doin?” your ears perk right up.

Mike has the unmistakable voice of a radio mega-personality. Deep, rich, and resonant, you just know his voice kept radio listeners tuned in for decades.

Before retiring and moving to Cambria with his wife, Jacque, in 2009, “Griff” spent years behind the microphone, first in student radio while attending Notre Dame, then in South Bend at WJVA, and then helming the morning show at WNAP in Indianapolis. He was on the ground floor of that start-up station in the late 60s, that hit #1 in the market in just two years with a Top 40 Album Cuts format. By the end of ’72 Mike was recruited to Cleveland and WMMS, and a station called Q95, but eventually he was lured back to WNAP.

Griff’s work in radio didn’t stop at the microphone. He also worked in concert promotions. For a while he left radio and began doing advance work from some of the biggest touring musical groups in the country. And at one time he and his wife also ran a publication called the Hot Potato. It was a paper not unlike our local New Times. Jacque had worked for the Business Journal and, between the two of them, they had amassed business connections in Indiana as well as neighboring states.

But even with all of the work coming Griff’s way in media and voice work, nothing could keep him from his life-long passion, Indy racing. “On the weekends, I would head to the track and ‘push and polish’ for friends. Anything they needed me to do,” said Mike.

Being a huge racing fan as well as a known personality in Indianapolis it wasn’t long before he was doing much of the voice-over work connected to the Indianapolis Motor Speedway as well. And in 1997, Griff fulfilled his dream by joining forces with five other prominent racing friends to form their own Indy Series Team, the Panther Racing Team. The founders were Jim Harbaugh, a onetime quarterback for the Indianapolis Colts; Gary Pedigo, a partner in the Indy Auto Auction; Terry Lingner who owned a production company, John Barnes, and Doug Boles who owned the Speedway.

The Panther team dominated the Indy series for years, winning several championships and came in 2nd at the Indy500 four years in a row. That kept sponsors like Pennzoil and the National Guard on board. Mike says, “Speed costs money, just depends on how fast you want to go. It can cost anywhere from $5 to $20 million a year to run a car.”

Mike left the team in 2009 to retire to Cambria and Panther Racing ended in 2013. These days you can find Griff relaxing by the beach and enjoying the local wine scene and live music. “I never had an ocean before. It’s the best.” And each year, when Cambria celebrates the end of summer with its Pinedorado parade, you can hear Mike’s baritone voice in the West Village announcing each arrival to the crowd. By his side will be his constant companion, Tashi, his dog that he and Jacque rescued in Morro Bay. “Tashi is a Tibetan word for good fortune. That about says it all.”