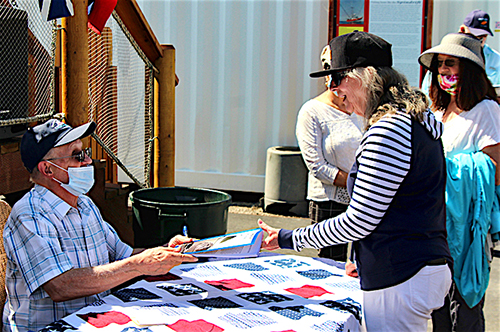 Joe Dunlap, seated signs copies of his book ‘ When Morro Bay Went to War’ at a book signing event April 1 at
the Maritime Museum.

Over 50 people turned out April 1 for a book signing and reception for Joe Dunlap, author of “When Morro Bay Went to War,” in an event that turned into a reunion of long time friends.

“The Morro Bay Maritime Museum preserves, promotes, and celebrates the history of our maritime heritage,” Mather said in an email, “for all citizens of Morro Bay and the Central Coast. As I said in my opening remarks it is not my museum or our museum it is ‘Your Museum.’”

Dunlap’s book illustrates how the Navy took over Morro Bay Harbor, after the Army Corps of Engineers dredged the navigation channel and closed off the harbor’s north entrance to create a protected harbor. The Navy also built a training base for marines headed for the Pacific Theater to fight the Japanese at what is now the power plant property.

WWII transformed the waterfront and set the stage for the tourist destination it is today.
Mather commented about how multiple generations of locals turned out, as grandfathers and grandmothers, shared the day with their grandchildren.
The Association has ambitious plans for its little slice of the waterfront. Mather said they hope to get the City’s permission to build a small “fishing shack” on a dirt area between Embarcadero and the power plant’s sound wall.

That shack would become a permanent part of the museum grounds and home to an exhibit celebrating the local commercial fishing industry. The museum has numerous items people have donated over the years, but they’ve had no room to display.
They also hope to be able to bring in a Quonset hut that someone wants to donate and install it on the other side of the sound wall behind the museum’s storage containers.

That would become a multi-purpose building, used for exhibits, meetings and movies/lectures. When the Navy base was operating, there were dozens of Quonset huts on the site.

But that’s also where the harbor department has several camping spaces set up last year as part of a pilot program to allow paid overnight camping as a way to bolster the department’s sagging revenues.

For information about the Maritime Museum and to join the fun, see: www.morrobaymaritime.org.