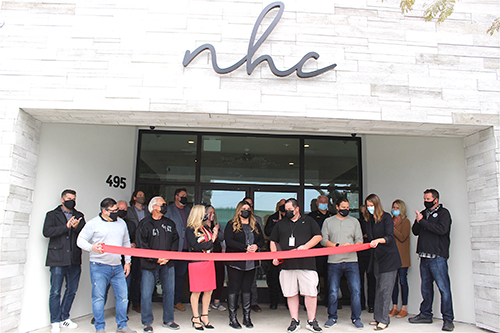 A second marijuana store has opened in Morro Bay in a spiffed-up storefront at Morro Bay Boulevard and Napa Avenue, in the heart of Downtown.
Natural Healing Center or “nhc” for short held a soft opening and Chamber of Commerce ribbon cutting on Monday, April 12 in the former long-time home of Mill’s Stationary and ASAP Reprographics, 495 Morro Bay Blvd. Mill’s/ASAP moved last year to a store on Quintana Road just down from Main Street.

The Morro Bay store is nhc’s second in San Luis Obispo County. The company opened a Grover Beach store nearly 2-years ago and is now working on a San Luis Obispo location on Broad Street.

The company also has a store in Lemoore and after the SLO location opens, slated before the end of 2021, a fifth store will be built in Turlock, Calif., located just south of Modesto on Hwy 99.

Several large marijuana and hemp farms in SLO County including two on Los Osos Valley Road near the intersection with Foothill Boulevard at a former berry farm belong to nhc.

The new store was extensively remodeled inside and out, with a new paint scheme and front façade using barn-wood-like wooden siding painted in a whitewash.

It features stylish canopies along the front of the building and windows treatments that let in light but you can’t see through, lending a modicum of privacy for customers.

It’s hard to believe it’s the same store, as the change is that dramatic from the stationary store that operated there for decades.
Inside, the transformation is even more dramatic, with a beautiful stone front desk and a lobby with two living artworks — succulent plants grouped into living wall treatments. Identifications are checked at the front desk.

Beyond a set of security doors the interior is split in two with different types of marijuana and hemp products featured in each side. The interior walls are decorated with huge enlargements of beautiful photos taken of local scenes.

It gives off the feel of a high-end jewelry store with all the products in glass cases and so-called “budtenders” serving customers like jewelry store sales clerks.

Rebecca Oribello, nhc’s marketing associate said, “We’ve been using Nick Reed, R3B Corp., for all our new projects. Nhc invested over $1 million in the remodel of the Morro Bay location, which took about three and a half months. We will also have over 20 employees at that location.”

She explained that the store will have a full line of CBD products, as well as the marijuana buds and vape pens. “We’ll carry the CBD products you mentioned — lotions, tinctures, balms, edibles, etc., that have little to no psychoactive effects along with THC products for recreational users.” The store will carry over 1,500 products.

Joe Armendariz, nhc’s director of governmental affairs said, “Part of nhc’s vision as a company is operating high-end, world class dispensaries that provide a comfortable and classy atmosphere and friendly service. Our Morro Bay store will continue this tradition while partnering with the city to provide substantial community benefits including new local jobs and tax revenue.”

Company owner, Helios Dayspring, reportedly grew up in Morro Bay and Oribello added that nhc, “Will be the only locally owned and operated dispensary in Morro Bay.”

Morro Bay’s other dispensary, Perfect Union, located at 1000 Quintana Rd., opened last October. The city’s marijuana ordinance allows for just two within the city limits. Perfect Union is headquartered in Sacramento and has several stores in California and beyond.

Police Chief Jody Cox was on hand at the opening. He acknowledged that the department has been involved with nhc through the process of remodeling to ensure that the proper security measures are in place. Such requirements are included in the City’s cannabis ordinance.

Nhc’s opening comes as the City’s Measure E-20 sales tax, passed last November, takes effect April 1 and will impact the City’s revenues in the next fiscal year that starts July 1.

The City Council voted to levy a 5% tax on all marijuana products, which comes on top of the City’s two local sales tax measures — Measure Q at 0.5% and E-20’s 1%.

Oribello said the latest tax figures have nhc as the No. 1 tax revenue generator in Grover Beach. “It’s been the Vons for years but we’re now the top contributor,” she said.

Morro Bay City Manager Scott Collins said they were working on revenue projections from the City’s cannabis tax. “With both Perfect Union and Natural Healing Center being open now,” he said, “I think somewhere between $375,000 to $475,000 per year, but we are still working the numbers.”
So the boost in sales taxes that will come from the store’s opening, will come to the City as it tries to dig itself out of the revenue hole it fell into with the coronavirus pandemic response that went into effect in March 2020 and continues today.

The revenue losses from closed or greatly restricted businesses like restaurants, retail stores and even motels for several months as well, forced the City to essentially cancel its recreation classes and youth sports offerings, laying off over 70 part time employees.

Some of the exercise classes have been moved outdoors but youth sports and the teen center have not returned.

City employees, even management and the City Council, took pay cuts and literally, every department in the City felt the COVID contraction to its budget.

A comprehensive plan was hatched to carry the City through the pandemic that mostly involved layoffs and spending down the reserves.
With the two pot stores now open and generating tax dollars, plus a potential windfall of nearly a half million dollars from a potential battery facility being proposed at the Morro Bay Power Plant, the City’s outlook should be much rosier very soon.

Nhc’s Morro Bay store is open daily from 7 a.m. to 9 p.m. To enter the store you’ll have to provide photo ID and you must be at least 21-years old. They also only take cash, and there is an ATM inside the store.