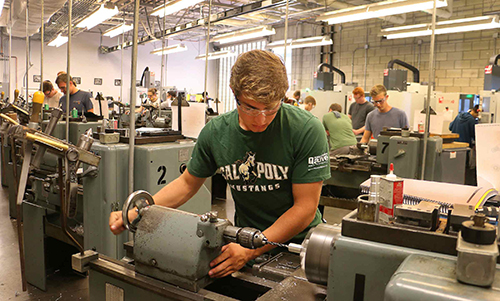 Mitchell Berger works on a lathe in the Material Removal Lab in this 2018 photo. The lab is one of two being renamed to recognize Haas Automation and its nonprofit organization, the Gene Haas Foundation.

Two manufacturing labs at Cal Poly will be renamed in honor of a $350,000 donation from the Gene Haas Foundation, which will help the labs remain up-to-date and safe for the hundreds of engineering students who use them every year.

“The new gift for the Gene Haas labs pairs two successful organizations, Cal Poly and the Gene Haas Foundation, and links together our interests toward graduating top-notch engineers and making sure our labs are state-of-the-art and in excellent condition,” said Dan Waldorf, chair of Cal Poly’s Industrial and Manufacturing Engineering Department.

To recognize Haas’ commitment, the material removal lab and the advanced machining lab, will be called the Gene Haas Material Removal Lab and the Gene Haas Advanced Machining Lab for the next 10 years.

Each facility will feature prominent signage with the Haas name and logo. Meanwhile, the donation will create an endowment for the lab to fund yearly technology, tooling and equipment upgrades. (The money cannot be used to purchase new or upgrade existing Haas equipment.)
“We should be on the cutting edge when teaching manufacturing engineering,” said Trian Georgeou, a lecturer in the industrial and manufacturing engineering department, who brought this opportunity to Haas. “In order to stay on the cutting edge, we have to continuously upgrade curriculum and equipment.”

The Oxnard, California-based Gene Haas Foundation partners with schools and organizations to expose students to careers in manufacturing and to provide scholarships to the students who choose a career in CNC machining and/or manufacturing engineering. When the foundation sought to boost its presence on college campuses, Georgeou responded with an in-depth proposal to support the labs.

“Gene Haas believes that a strong manufacturing economy is vital to the strength of a nation,” said the Haas Foundation’s Kathy Looman, director of education and Gene Haas Centers naming rights.
The foundation had previously sponsored labs at Cal Poly — including $40,000 annually for student lab techs.

“The Engineering methodology at Cal Poly is completely aligned with the manufacturing industry as a whole as well as Haas and their customers,” Looman said. “In manufacturing, specifically in machining, the phrase ‘design for manufacturability’ is frequently used and extremely relevant.”
Many engineering programs, she added, have gravitated toward the theoretical side of teaching, losing sight of the manufacturing aspect of design.
Cal Poly students, Georgeou said, are first exposed to the design for manufacturability concept their freshman year. “So, when they get out to industry, they’re not going to design something that can’t be made,” he said. “They’re going to understand what can and can’t be done with these machine tools, and they’re going to get the projects done.”

The material removal lab is especially prominent in the college. Each year, some 700 students — typically freshmen, from numerous engineering programs — learn to use the machine tools there.
“We’re running four three-hour lab shifts a day in there,” Georgeou said. “We start basically at 8 in the morning, and we end at 9 at night.”
In the advanced lab, roughly 200 students — typically mechanical and manufacturing engineering majors — produce more-complex parts, molds and fixtures of their own design.

Both labs contain Haas machines that were offered to the college at educational-discounted prices. Those machines, Georgeou said, help students to be prepared for careers on day one.