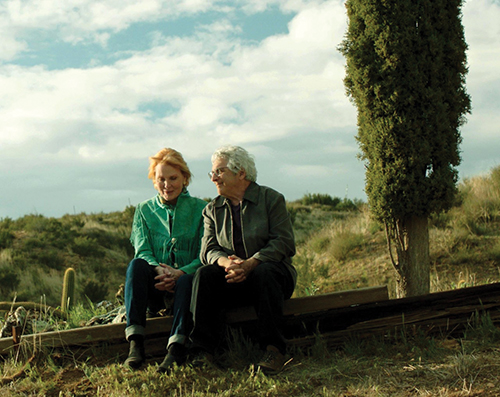 Actors Mariette Hartley and Jerry Sroka star in “Our (Almost Completely True) Story, which will play at the February 10 Cambria Film Festival Welcome party and screening.

The Cambria Film Festival returns for its sixth year February 8-12, 2023, bringing independent films from around the world to Cambria — all with a focus on romance, romantic comedies, and the complexities of love.

Passes are now on sale at CambriaFilmFestival.com.  This year’s festival includes more than 60 films, three parties, and multiple filmmaker talks.

• Opening Preview Reception and Film on February 8 featuring Fire of Love – a stunning documentary that has been wowing film festival audiences around the globe since its premiere at Sundance earlier this year.

•  Filmmaker Welcome Reception and Film on February 10 featuring Our (Almost Completely True) Story—a rom-com inspired by the real-life romance between actors Mariette Hartley and Jerry Sroka. Both actors will be in attendance.

• More than 50 independent short and feature films divided into 15 competition programs—selected from nearly 400 films submitted from filmmakers in 52 different countries.

• Plus additional screenings of films not in competition at both Moonstone Cellars club members lounge and at the Cambria Memorial Veterans Hall, local film premieres and the opportunity to stream competition shorts after the live festival.

The Cambria Film Festival celebrates stories of love that connect us.

“In our first five years, we have showcased nearly 300 films from over four dozen countries,” says Dennis Frahmann, director, Cambria Film Festival. “We have featured independent, student, and veteran filmmakers — and welcomed scores of filmmakers to spend time with film lovers in our small town. The Festival is a film experience that bonds us through a world of stories.”

The three Festival Pass options currently on sale at Early Bird prices are:

• All Access Festival Pass for $119, regular price $149. Offers access to all films, all Gala night events and parties, all filmmaker talks and a complimentary pass to the post-festival encore streaming of the shorts program.

• Film Pass for $59, regular price $79. Offers access to all films and talks, as well a complimentary virtual pass, but does not include the three Gala night events.

• Virtual Pass for $25. Offers streaming access to all competition shorts and other selected programming from February 12 – 20.

Full scheduling and individual screening tickets will become available in early December. This season, most films will be shown in the newly refurbished Cambria Center for the Arts Theatre, 1350 Main Street, Cambria, CA. Updates include a new sound system, larger screen, improved lighting, and an additional screening room.

At its 2023 close, the Festival will announce the following awards:

•       The Nancy Green Founders Award for the Best of the Fest

For more information about the Festival, visit www.CambriaFilmFestival.com.

← Previous: Give Credit to the WRF Cambria Rotary Gives to Those in Need →