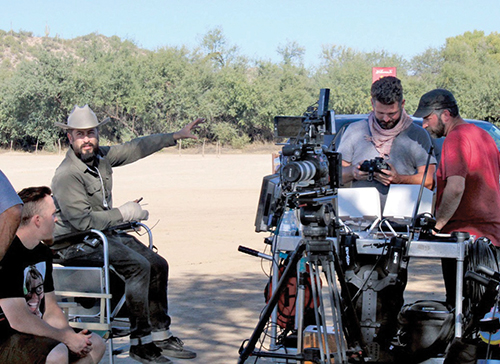 David McAbee on the set of “For the Love of Jessee,” one of the films slated for the 2021 Cambria Film Festival, February 4-7.

The Cambria Film Festival returns for its fourth year February 4 -7, 2021. Once again, it brings independent films from around the world to Cambria—all with a focus on romance, romantic comedies and the complexities of love.

This year, the Festival plans include virtual screenings as well as a limited number of in-person screenings at the Cambria Center for the Arts Theatre. As in past years, there will be a number of full-length features in competition, plus 50 or more shorts grouped into themed programs. Also scheduled across the four days are on-line parties, streamed filmmaker talks, and special spotlight programs

“In 2021, the Cambria Film Festival invites you to share the love,” said Dennis Frahmann, director, Cambria Film Festival. “Our programming will share our awe of independent films from around the world, share experiences with filmmakers and film lovers, and share our support of our entire community.” As part of the event, the Festival will sponsor a four-day-long Virtual Silent Auction to raise funds for local charities.

Virtual All-Access Passes to the Festival ($50) are on sale at the Festival’s website, www.cambriafilmfestival.com. Patrons can upgrade their experience by purchasing a VIP Donor Virtual All-Access Pass ($95) that provides added benefits, including a party pack of treats. Tickets to individual screenings will go on sale in early January. This is also when the Festival will announce specifics for in-person screenings based on health guidelines for the county

Virtual passes allow a viewer to watch Festival programming on their phone, tablet, personal computer and, in many cases, streamed through a smart television. Passholders can choose to watch any film at any time during the official period of the Festival, and up to two days following. Also included with the pass are a number of special watch-party events and filmmaker talks, as well as access to the silent auction.

This year, the Festival chose its selections from hundreds of films submitted to the competition from around the world.
Films were selected that represent more than a dozen countries. But one full-length movie has very close roots. For the Love of Jessee is a romantic feature written and directed by 2001 Coast Union High School graduate, David McAbee. The film is about a young doctor who loses his wife and becomes a father in the same night.

The Cambria Film Festival is an official activity of the Cambria Center for the Arts, a non-profit dedicated to local arts. Festival presenting sponsors for 2021 include Elaine and James Anderson, William and Diane Franciscovich, Cambria Pines Lodge, Cavalier Oceanfront Resort, and many other area businesses and individuals.

For more information about the Festival, visit www.CambriaFilmFestival.com. A video recap of the 2020 festival can be found at https://vimeo.com/421215396