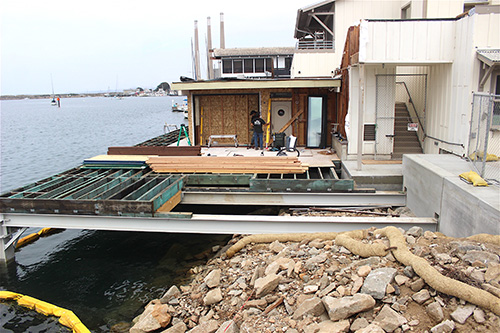 A project to turn the second floor of Rose’s Landing into motel rooms triggered an expansion of the Harborwalk on the lease site, which as seen here, turned into a huge job with new pilings, I-beams and decking, plus a new seawall (not shown in the picture). A new business group has formed consisting of master leaseholders on The Embarcadero to address such issues.

A group of business people with vested interests in Morro Bay’s Embarcadero, have formed a new organization to address issues on the waterfront and look out for their interests.

Called the “Embarcadero Master Lease Holders, LLC,” the group consists of master leaseholders of tideland’s trust properties at such places as Dutchman’s Landing, Morro Bay Landing and the Harbor Center, among others.
Formed last June, the EMLH takes up where its predecessor, the Embarcadero Merchants Association, left off years ago when it went inactive.

That organization formed some 30 years ago, said Paul Van Beurden, the EMLH groups’ president and master leaseholder at Dutchman’s Landing, as well as the owner of Dutchman’s Seafood House restaurant. The difference, he added, is the old group was more of a marketing organization. This new one is just the master leaseholders and was formed to represent them with the City on policies that effect them.

Morro Bay’s tidelands trust properties are for the most part the properties on the west side of the Embarcadero. Such lots are owned by the State and administered by the City under an agreement that goes back to the 1960s.
The City owns and leases out the land and adjacent water areas, collecting rents to support the Harbor Department, but it’s the leaseholders that have invested, in many cases millions of dollars, and keep the economy running.

Van Beurden said the members had been talking about needing a unified voice for the past few years. “We saw issues coming up that we needed to take a look at.” Among those was the City’s rewrite of its master lease policy, the governing document that serves as the basis for future lease negotiations.

Board Secretary-Treasurer, Bob Fowler, who completed a total rebuild of Morro Bay Landing (formerly Virg’s Landing), said he served for 2 years on a committee going through the master lease policy and realized there was little communication with the leaseholders. Fowler and Cherise Hansson of the Harbor Advisory Board and a master leaseholder too, were on the committee.
And the City’s work on updating the general plan and local coastal plan, which is practically the Bible over waterfront development, too was pushing ahead without input from the leaseholders. “There was no one on the general plan committee from the waterfront,” Fowler said, “and when it was finally written up there were some real deal killers.”
Van Beurden added that the LCP sent up red flags, and some of the provisions didn’t make any sense, were impossible to achieve or prohibitively expensive.

“It has some poorly written sections,” Van Beurden said, “that will have impacts for the future.”
Their chief concerns include the Harborwalk, the City’s planned pedestrian walkway on the waterside of the lease sites. The City instituted the concept long ago, and improvements are the responsibility of the master leaseholders to build, either when a site is redeveloped or significantly expanded or even if the use changes.

For example, Rose’s Landing is currently under construction to change its second floor into motel rooms. That project triggered a requirement to rebuild the Harborwalk across the west side, a massive project requiring huge I-beams, new pilings and a new seawall.

Fowler commented, “We’re not against the Harborwalk, but it needs to be implemented so it makes sense.”
For another example, the LCP’s treatment of sea level rise, which they said calls for the Harborwalk to be put on floats. But that would also mean the land is being inundated with seawater, and essentially unusable.

It also changes the width of the Harborwalk from 8 feet to 10, which could mean in Van Beurden’s case, either loping off part of his restaurant building or paying enormous costs to drive new piles and widen the path. The Dutchman was totally remodeled in the early 1990s with an 8-foot walkway installed and he’s planning to propose some improvements that would bring the Harborwalk around an old fishermen’s wharf at the Dutchmen’s lease site. He’s hoping to also get a significant extension of his lease, which has just 13 years left.

Van Beurden added that there’s a huge eel grass bed on the bay floor at his lease site, making expansion of the walkway much more difficult and expensive. Driving new piles alone could run $180,000, he said, for just 2 feet more width.
It’s the Coastal Commission that came up with the 10-foot standard, which caused the remodel and seawall repair at The Boatyard to have to demolish and rebuild part of the walkway on that site.

Smith Held, the group’s vice president said the remodel of the Harbor Center (home of the Hofbrau), where he has the master lease, was just rebuilt at 8-feet and if the change to 10 feet becomes Gospel, he’ll technically be non-conforming and any future project could trigger the expansion requirement.

Cathy Novak, who is the group’s hired consultant, said the City’s in-lieu fee for lateral access at places where it simply can’t be installed has problematic language as well.
Among the definitions “shall” and “will” “should” and “may” in the document “are mandatory unless there’s a compelling reason to do otherwise. And, ‘wholly disproportionate’ is the cutoff. The language is totally subjective.”
Held said it’s hard to develop a plan when the rules change through project review, like when it goes to the Coastal Commission, which has ultimate jurisdiction over the waterfront.

Whatever the City ultimately puts in the LCP and is certified by the Coastal Commission, the State agency will hold the City to it. Novak said therein lies the problem for the leaseholders.

“The LCP and general plan,” she said, “should be ‘big picture’ and not have specifics. Specifics go in the zoning ordinance.”
Fowler said, “It turns into handcuffs. The whole waterfront will deteriorate if you can’t redevelop.”
Fowler said the master lease policy is a roadmap for the Harbor Department to manage the lease sites. “We’re advocating for the market to drive what’s needed down here.”

“There are a lot of unintended consequences,” Novak said. “They don’t understand what it takes to run a business on the waterfront.”

She explained that someone might go to the bank for a $500,000 loan to remodel, but then they need another $200,000 for later access. “So you have to borrow another $200,000 that you get no revenue from,” she said. “But your loan is now $700,000.”
Van Beurden said the group really came together over concern about the City’s Coronavirus Pandemic response that shut down the Embarcadero last spring but soon morphed to include issues in general on the waterfront.

They’ve submitted a formal set of comments to be included with the Planning Commission’s review of the draft general plan/LCP. It’s the first formal input they’ve released and seeks to make the business climate on the waterfront easier to live with.
Harbor Director Eric Endersby said the initial concerns were over the City’s deferred rents enacted last spring to help get Embarcadero lease holders through the shut down, and how and when would that need to be repaid?

“In that role,” Endersby told Estero Bay News, “they have been quite helpful and we are working with them on a couple possible options.”
He added, “I think it is great that they formed, in fact, I urged a couple of them to do just that as I had several hitting me from different directions in the early COVID days. So it’s great that they have formed a representative group.”

Community Development Director, Scot Graham, said the EMLH’s input on the City’s plans would be considered by the Planning Commission when it goes over the draft documents.

“We are always interested in making the document more clear and straightforward,” Graham said, “so their input will likely result in doing just that.”

As for the group’s future, Endersby thinks it’ll be helpful. “I think they will be a valuable sounding board when we need to bounce things off of them as a group,” he said, “in addition to being good reps of the group for collective issues of concern, like the lease rents and COVID. I am also hopeful they will as a group work together for collective issues and come up with collective solutions, as opposed to the one-off solutions that often come about on a site-by-site basis.”

← Previous: A Call to Save Christmas Cambria Film Festival Tickets on Sale →