Carrying on a Family Tradition 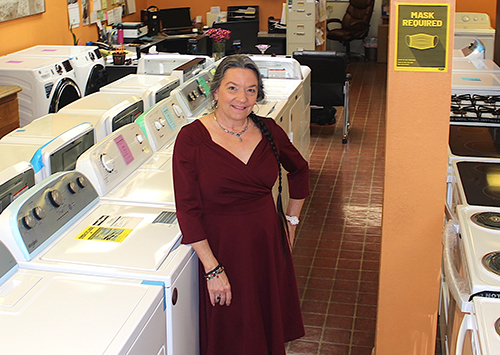 It’s one of the longest tenured family businesses in Morro Bay and a recent change in management only furthers that along.

Mike Mlnarik, owner of Morro Bay Appliance, 935 Main St., announced that his wife, Annette, has joined the family business as the office manager, in a business that has had but three owners over the many years.

Bob and Rhoda DeSomer opened the store in the 1960s, Annette explained. “Mike’s parents, {Jim and Sherry Mlnarik} had it for over 25 years, and we’ve owned it now almost 11 years.”

She said her in-laws are “happily retired” and enjoying life. “They’re super excited Mike and I are working together. Sherry said, ‘You’re taking after us.’”

Like for most everyone, the coronavirus pandemic has been tough. Annette had to give up her business at Casa de Flores where she had a hair salon for nearly two decades. She had been considering joining Mike at the appliance store for several years, but her job at Casa de Flores was a joy, until the virus changed everything and the facility was pretty much locked down.

Doing hair can be a hard occupation. And with the lockdown for COVID-19, she hadn’t been working for some time. Cutting hair takes a toll on your body, she said, especially the hands from the various chemicals used in cosmetology. She was on and off of work for 2 years, she explained. “It was very unnerving. I do miss my people and I couldn’t even see anyone and say good-bye.”

At the store, they’ve also had some turnover, as two employees — a service tech and deliveryman — retired and they also lost their former office manager to another job.

But that woman has returned for part time work, which Annette said has been good because she is helping her learn the business. Because of the employee turnover, “It just seemed like the right time to make that change.”

Changing jobs after so long is difficult for anyone but she sees it as a new challenge. “It’s pretty awesome actually,” she said, “I’m learning a lot more things now.”

Mike is an appliance repair technician; so he’s constantly out make service calls. “We’re booked for service calls through the end of the month,” Annette said. “Mike’s been pulling all the weight. But we still have our lunches every day,” that’s something they’ve made a point to do, even while she was at Casa de Flores.

She added that the store also has a lot of refurbished, used appliances Mike has fixed, and one other interesting feature — a window display of antique appliances that Mike started when he took over from his parents.