Chablis Hauls Out for Repairs 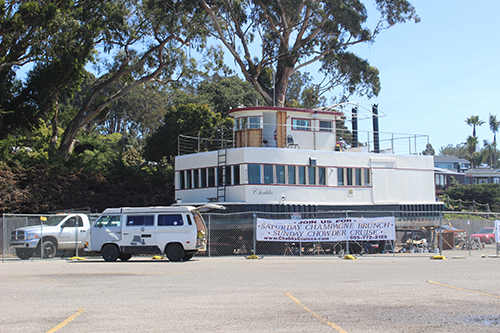 The harbor cruise boat, Chablis, has been in dry dock down at the public launch ramp for the past several weeks, undergoing repairs that include new, more efficient engines.

According to the Harbor Department the Chablis must haul out and work there because the harbor has no boatyard large enough to accommodate it.

And the City’s been unable to fund anyone interested in building one after several years trying, so there likely won’t be a yard built here to accommodate larger boats like Chablis.

Indeed, there isn’t a boat hoist or travel lift within 100 miles that can lift the overly wide Chablis. The boat is also not allowed under Coast Guard regulations to leave the harbor and travel by sea to such a boatyard. Thus the Harbor Department and the owners have reached an agreement to allow the boat to be hauled out on a special trailer and a work fence erected around it.

“Hauling at the launch ramp in the off-season,” the Harbor Department said in a recent City Manager Newsletter, “when the ramp is virtually empty is the only option.”

Also, with the annual rockfish closure in full swing from Jan. 1 to April 1, there hasn’t been the normal flood of sport fishermen using the launch ramp or the parking lot.

The Chablis runs harbor cruises and Sunday brunch cruises. It features a catered kitchen, can serve beer and wine and is a popular platform for weddings and other celebrations.

The boat originally plied the San Francisco Bay waters until it was purchased and brought to Morro Bay, after a daring one-way voyage, back in April 2007.

The Chablis is owned by Big Rock Charters, LLC, which is Annie Clapp, Shasta Rouch Birkey, and Patti Rouch, with Annie’s husband, executive chef, Rodney Clapp, handling the kitchen duties. According to the Chablis website (see: www.chabliscruises.com) Annie and Rodney Clapp met in cooking school and both are classically trained. Annie’s sister, Shasta, is retired from the U.S. Navy after a 20-year career.

Chablis is docked between Harbor Hut and Great American Fish Co. The plan was to be done with repairs and back on the water in time for an April 2, 2-hour chowder cruise, with Sunday brunches starting up again April 10.

Call 805-203-6575 for customer service or email to: support@chabliscruises.com. You can also book a cruise via the website.