For the Love of Cats 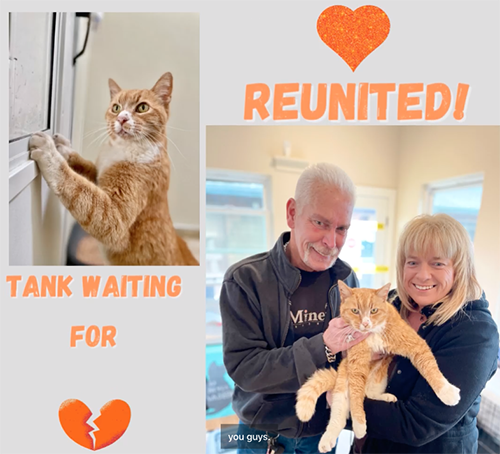 Tank, the cat, with his person Michael Olson and his roommate, Amy Orlauski.

After nearly two decades together as a family, a Los Osos man would have lost his furry companion if not for help from a North Coast cat shelter.

The Homeless Animal Rescue Team (HART) in Cambria is a no-kill animal rescue and adoption center with roots dating back to 1983. They also work to reduce feline overpopulation with an active spay/neuter program for HART’s felines and a trap-neuter-return-manage (TNRM) program for feral cats.

“We take cats in any way shape and form, and we rehab them if necessary, then we try to place them in forever loving homes,” said HART Medical Director Stacey Ballard, a registered vet technician. “We have cats that have come from dire depths of being neglected or abused or mistreated. Cats are different on so many levels, but they are highly adaptable. They have unconditional love. Once you can find that in a cat, you can find their true personality and if you foster that good behavior, that good attitude, you have cats that are adaptable to people.”

An example of that unconditional love is Michael Olson, of Los Osos, and his big orange tabby Tank. The two have been a family for nearly 16 years.

“He fit in the palm of my hand and knew no one else,” Michael wrote in letter to Estero Bay News.

Things took an unexpected turn about a year and a half when a new landlord took over the place where Olson lived and instated a “no pets allowed” rule.

“I could not bear to lose him, Michael said, but set out to find a new place to live for his companion. “I was calling everywhere for someone to take Tank and give him a good home,” Michael said. “We would find him homes and, for one reason or another, it did not work.”

HART had an opening and agreed to take Tank into the shelter with plans for him to live with Stacey after a few weeks.

“I drove to Cambria that day, and it was the hardest day of my life,” Michael said. “I could not stop crying for fear that I would never see him again.”

Michael and his roommate, Amy Orlauski, visited Tank a couple times a week while he stayed at HART.

“Michael and tank are very, very bonded,” Stacey said. “When Tank came into the shelter he was in fairly good shape, but as soon as Michael left you could actually see the sadness come over him. By the day he was getting weaker. He was losing weight. The human animal bond is undeniable, and it’s something that most people don’t understand, but it is very real. I try to facilitate that bond as much as I can,”

That led the HART team to step up again and offer to pay a “substantial” deposit to the landlord to allow Tank to return to his home.

“It was extenuating circumstances,” Stacey said. “That’s not to say that every cat that comes in, we’re going to try to cough up money. I don’t want to come across that way, but we recognize their bond, and it was undeniable. Tank is just a big, orange puddle of love.”

The landlord declined the offer and Tank remained in the shelter. After five weeks things took a turn for the better. Through group efforts between Amy and HART, Tank was designated an emotional support animal, and he was able to return home where he no doubt once again took over Michael’s lap.

“There are no words to say how much I appreciate Stacey and the crew at HART,” Michael said. For everything they were willing to do to help me get Tank back, they will always be in my heart and are now a part of my family.”

HART will hold a free open house for a day of “felines, food and fun” on May 21 from 11 a.m. to 2 p.m. at the shelter at 2638 Main Street in Cambria. The event will feature cats and kittens, shelter tours, kids activities, food and wine, demonstrations, foster information and music by the Kitty Ditty HART Band. Adoptions will also be 20% off.

Don’t miss the chance to “High-5” Phil, the cat taken in from Arroyo Grande that brought home $2,000 to the organization via third place honors in a contest by celebrity cat behaviorist Jackson Galaxy. HART entered two videos, but the “blooper reel” one the honors.

“Phil was a little pistol,” Stacey said. “He actually took over somebody’s house and ran their cats off. He was not really friendly with all the other cats, so we put him in the Cat Pawsitive program and he has excelled. He’s a much more manageable kitty cat. He gets along with others for the most part. He still has his moments.”

Watch the video that made Phil the big winner at https://bit.ly/3LdZNDY.

The HART Cat Pawsitive Training Team will hold demonstrations and discuss how Cat Pawsitive Training, using a clicker and rewards, helps shelter cats become more socialized and adoptable. The furry, four-legged star student Midnight and others will show off his feline skills at obstacle courses.

“What you guys will see is going to amaze you trust me,” Stacey said. What I see the team doing is just outstanding.”

For both cat and art lovers, the event will also showcase cat sculptures originally hand carved in a small village in Indonesia that were “fostered” here by local artists and brought back to life in colorful designs full of individual character.

“I’m really excited about these sculptures,” said Stacey. “They’re just amazing. I have my eye on a few.”

The sculptures are being auctioned online right now with a starting bid of $100. All proceeds go to HART. To check them out or make a bid, go to https://bit.ly/3NbHMHI or visit them in person at Art with Judy Ann Studio within the Garden Shed at 2024 Main Street in Cambria.