Home of the Cuban Sandwich Getting New Home 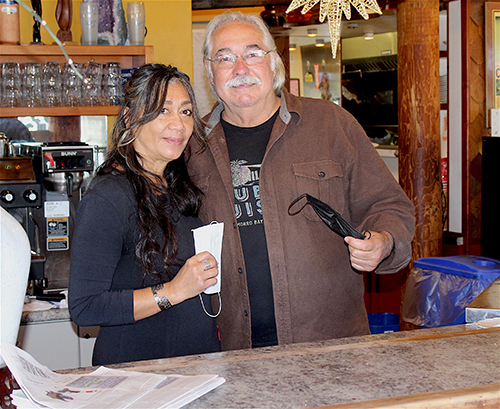 A local restaurant owner is about to double down on his investment in the Morro Bay waterfront, and folks will soon have another eatery and nightclub to enjoy themselves, while getting a taste of Caribbean culture.

Jorge Milanes, owner of Thai Bounty, 560 Embarcadero, is working to open Milanes’ Cuban Food — Bakery Café & Grill, at Morro Bay Landing, clear on the other side of the waterfront at 1215 Embarcadero.

For Milanes, he’s coming around full circle, returning to the location where it all began.
Thai Bounty, he explained, started July 4, 2009 in the “Finicky Fish” building, a small space next to Tognazzini’s Dockside Restaurant and part of the MB Landing lease site.

That quaint building, with the façade of a boat, was torn down with the redevelopment project that included a new 2-story building and extensive floating docks, built by Bob Fowler.

Milanes said Thai Bounty started serving just Thai food and subleased from Sharon Moores, whose family had the long-time Virg’s Landing. Fowler took over in 2012 and completely rebuilt everything.

“Bob was my landlord for 3 months,” Milanes said. They continued with the Thai menu at the new location until 2017, when MiIlanes decided to expand and offer a Cuban sandwich and other items, making it both a Thai and Cuban eatery.

Milanes said he’s had the normal ups and downs at Thai Bounty and recently was facing his lease coming up for renewal. He had to make a decision whether to stay at the location, which includes a wonderful outdoor patio. “It’s certainly one of the nicest patios” on the Embarcadero, he said. Then Fowler, who had not found a tenant for the upstairs restaurant space at Morro Bay Landing, approached him.
“He made it attractive for me to make the leap,” Milanes said. But instead of moving again, he decided to open a second restaurant that will only have the Cuban cuisine from his Caribbean homeland.

It’s a huge and costly undertaking, as the new space hasn’t been finished out. “We have to put in everything,” he said. “From the ground up.” That includes finishing the walls and installing a commercial kitchen; work that is being done now.

“Bob’s been great to work with,” he added. His plan is to decorate in a tropical theme, feature exotic cocktails, beers and wines, and also have a live music venue. Milanes is an accomplished harmonica player himself and has often sat in with friends playing around the area.

Anyone who owns a restaurant could tell you how much work it is, but owning two? Milanes said he realized that he needed some help and decided to take another leap of faith and hire an operations manager to get the new place up and going. He found someone on Craig’s List.

Elizabeth Kennedy, Liz for short, a respected industry hospitality consultant & senior restaurant operator from San Francisco, answered his ad. Hailing from Hawaii, she brings over 20 years of experience, along with an upbeat, “Aloha” spirit.

Kennedy explained that she was born and raised on the islands. She spent summers on Molokai, Hawaii’s fifth largest island, just 38-miles long and 10-miles across at the widest spot.

She got a passion for the food business attending luaus where “some of the best cooks on the island would get together and create mouthwatering dishes that danced in your mouth once it hit your palette using exotic fruits, fish and meats,” she said.

Kennedy said she moved to San Francisco in 2005 bringing the Aloha hospitality spirit with her and worked from the ground up — as a server, host, cook and bartender, before moving up to senior management. She took that experience into her consulting business and with this new position, has moved to Morro Bay. “The Central Coast brings the feel of Hawaii,” she said.

For Milanes, the new restaurant will allow him to introduce more locals and visitors alike to further enjoy the flavors of Cuba. He’ll be bringing the delicious Cuban sandwich to the new place, adding new dishes, including what he humorously calls the “Smash burger,” flavored with Cuban blends of spices, fried plantain chips, and several specialty fresh seafood dishes, as well.

He even plans to get a commercial fishing license to go out on his boat — Instant Karma — and catch fish himself. He’ll also buy from the local commercial fleet, as he acknowledges that he won’t be able to catch all the fish himself.

He plans to have “savory” fish and chips. “We will be heavy on fresh fish,” he said. And his Cuban spiced ceviche (fish stew) will be unique, as well.
Milanes said as part of the new venture, he’s also leased a small fish processing plant at the Landing to cut fish for the restaurants, as eventually he will be expanding the menu at Thai Bounty, too.

Kennedy said the real difference is that Milanes’ food will “really be sticking to the culture, the traditions. I know all we have to do is introduce this to people.”

The Cuban bakery will also have pastries the island is known for, and Milanes said he’ll be open for sport fishermen, who depart pretty early in the morning from the landing’s sport boats.

“I’m going in with the mindset that the whole sport fishing fleet is below me [on the docks],” he said. “I’ll be open early for them.”
The interior of the new place will be casual, Kennedy said, with the warm feeling of Aloha, but “pretty elegant for a burger and sandwich spot.”
Milanes said he would like to include some tribute to author, Ernest Hemmingway, who famously hung out in Havana, deep sea fishing the Caribbean and enjoying the island lifestyle.

“I just want a bigger audience for the Cuban sandwich,” Milanes said.
Kennedy said the plan is to be open sometime in November, certainly before the holidays begin, within the next few weeks. “Staffing has been a real challenge,” she added.

If readers would like to apply for a job at the new restaurant, they should call Thai Bounty at (805) 772-2500 and ask for Liz Kennedy. She said they are starting people at competitive pay with growth opportunities.

And Milanes said if the new restaurant takes off — as he believes it will — they might look to open a third spot.