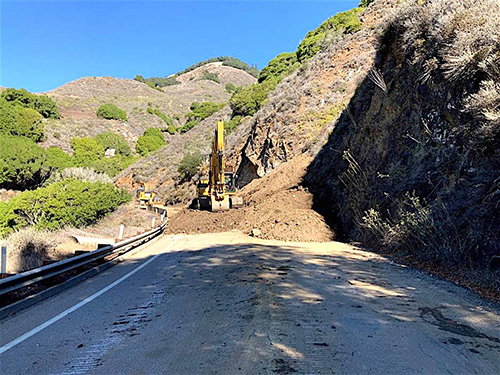 Contractors made quick work clearing a landslide on Hwy 1 during an Oct. 27 rainstorm just north of Ragged Point that completely blocked the roadway.

Caltrans hired Papich Const., of Arroyo Grande to haul the 20 truckloads of dirt and rocks that came down at mile post 0.25, about 2 miles past Ragged Point in Southern Monterey County. The contract was for $500,000 and the road was reopened on Oct. 30.

But it mightn’t have gone so smoothly, as the hillside above the roadway got undermined by the landslide and was looking perilous.
“Crews were able to dislodge an undermined rock outcrop the afternoon of Friday October 30,” said Caltrans spokesman, Kevin Drabinski. The agency had estimated it would be Nov. 3 before the road was cleared.

Though this rockslide was quickly cleared, it doesn’t bode very well for California’s most scenic and most famous stretch of roadway — Hwy 1 through Big Sur — to get blocked by the first rainstorm of the season.
This landslide is several miles south of the massive Mud Creek Slide of May 2017 that kept the highway closed for over a year. Photo courtesy Caltrans