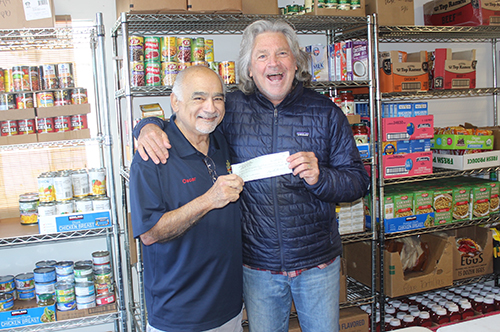 A local community organization showered a little kindness on the Kindness Coalition, donating some $500 to its humanitarian efforts to feed local children and their families.

The Coalition has a pantry located next to the Avocado Shack on North Main Street, which has granted use of an out building for their group’s pantry.

One of the Knights, John Lally, said they raised the money selling hot dogs and bratwurst at the Lighted Boat Parade. They had hoped to clear $1,500 he said, and they did so easily. He said he had read about the Kindness Coalition in Estero Bay News and his wife has been volunteering with them.

“We hadn’t identified a charity to receive the money,” Lally said. When he nominated the Coalition to receive the donation, “It took about 30 seconds for them to approve it,” said Lally, who volunteers himself with Los Osos’ food pantry run by People Helping People.

DeLancelotti was grateful for the donation, which will help his quickly growing efforts to assist needy families. His efforts started in 2017 when he asked the Principal at Del Mar Elementary what he could do to help needy kids at Christmas. She told him about 10 families that wouldn’t get a visit form Santa that year and deLancellotti got to work, putting together two gifts for each child plus $100 gift cards.

In January he received a thank you note form the Principal who noted that 64% of their kids are on the free lunch program and many often go hungry over the weekends.

In March 2018, he started “Got Your Back,” a program that helps feed kids over the weekend, providing two breakfasts, two lunches, two dinners, healthy snacks, fruit, milk, and juice to each kid enrolled, according to the Coalition’s website (see: esterobaykindnesscoalition.org).

That simple program started at Del Mar and has now spread to some 135 families at eight local schools. It’s become a mission in life for deLancellotti, a pastor with the Vineyard churches, and his wife Denise, and the organization’s now 60-70 volunteers. He describes their work as “Love without an agenda” and “Giving dignity and hope to our neighbors.”

The local Grand Knight, Oscar Munoz was on hand to deliver the club’s donation. He said this is the kind of charity that the Knights of Columbus is happy to support.

As for future needs, deLancellotti said they need some big freezers. “I have meat on the hoof right now,” meaning the coalition has been donated some cattle but can’t butcher them until he has freezers to store the meat. That meat is also destined to become a part of their weekly bags of food.

He is also looking for some folks in Los Osos that would like to volunteer to deliver the bags of food to children and families in the South Bay. They’ve been working with Monarch Grove Elementary for 3 years he said.

The Kindness Coalition is a non-profit organization and donations are tax deductible. Contact them through the website.
In the photo, Grand Knight Oscar Munoz (left) of the Knights of Columbus delivers a check for $500 to Estero Bay Kindness Coalition founder, Bobby deLancellotti, at the group’s food pantry in North Morro Bay.

← Previous: Finish One Before Starting Another Vultures Keeping Up With the Times →