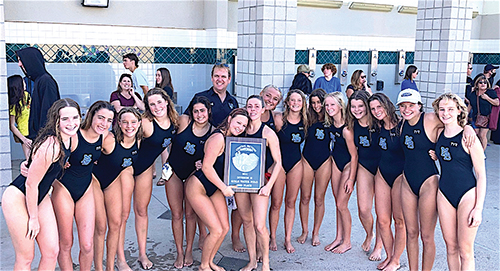 There was no treading water for the Morro Bay High Girls’ Varsity Water Polo Team this season, as the Lady Pirates battled through a tough league season and went deep into the CIF Playoffs, finishing the highest ever for the school’s program.

According to Coach Ryan Davis, the girls finished third in the Mountain League — the highest Mountain League finish this fall of all Morro Bay’s teams. They won the Western States Polo Tournament in Stockton and also the Arroyo Grande Fall Classic Tournament to qualify for the CIF Central Section Div. 2 Playoffs, and nabbing the fourth seed, the highest seed ever for the program, Coach Davis said.

The team beat Redwood High of Visalia, 8-6 in the first round, and faced the top-seeded Tulare Western in the semis. Coach Davis said the girls won a nail-biter 10-9 over Tulare to make it to the finals against Righetti High of Santa Maria.
But the Lady Warriors prevailed and Morro Bay ended a terrific season, 22-1 and second in CIF.
Sophomore Center, Josephine Davis, earned First Team All League honors, as well as First Team All CIF and Sydney Beckett, earned Second Team All League, and First Team All CIF.

For this team, defense was the name of the game. “This team’s success came from being a great defensive team,” Coach Davis said. “Sydney Beckett and Stella Mahan led the team in steals, while Devin Downing was able to comfortably handle most centers in the section.”

The offense ran through top scorer, Davis. “This team’s offense ran through the team’s center and leading scorer, Joshine Davis,” Coach Davis said. “Josephine was consistently double teamed allowing for our primary shooters, Carmen Panian and Sydney Phillips to score from the outside. “Goalies Kali Gammie, and Gwen Muff [a junior], did an outstanding job in the cage anchoring the defense. Other notables were sophomore Quinn Wilson as our top utility player and able to play multiple positions, and Alana Sachs as our top player in counter attacks.”

Expectations are high for next year and the girls can’t wait to get back in the pool. “The girls are excited moving forward,” Coach Davis said, “as they return most of this year’s team and expect to be one of the top teams in the section once again.”

← Previous: Yes, Virginia, There is a Santa Clause Dan at Autohaus Celebrates 30 Years →

A Harbor Patrol boat tows in a white Bayliner that was saved from sinking with three people rescued off Montaña de...

Morro Bay Police have arrested a local man on a slew of felony charges after he allegedly slashed the face of his...

Here’s the City’s rendering of potential improvements to Coleman Park and the Harborwalk area heading out towards...