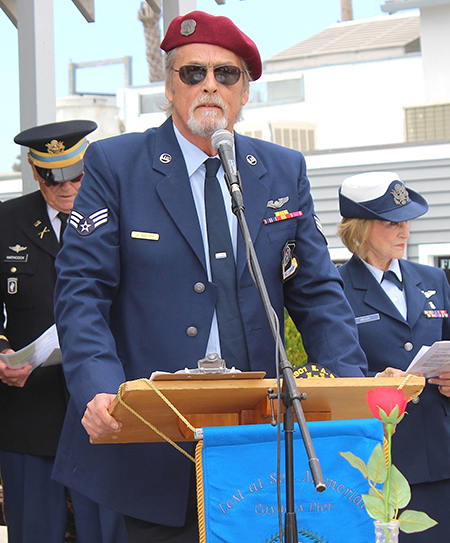 Though the coronavirus pandemic restrictions in California could be lifted by mid-June, it’s not soon enough to save a Memorial Day ceremony.
The “Lost at Sea” ceremony held annually on Memorial Day at the Cayucos Pier Plaza will not be held again this year, said Trudy O’Brien, one of the committee members that put on the ceremony.

“The ‘Lost at Sea’ committee has decided to not do the Lost at Sea ceremony this year in an abundance of caution,” O’Brien told Estero Bay News in an email. “Just too soon to know if we would be able to have a gathering of that size.”
Last year, when they also canceled the ceremony due to the pandemic, it was noted that many of the folks who attend are elderly and COVID-19 has been especially hard on them.

Normally blessed with clear sunny weather, the ceremony brings together anyone who has lost a loved one at sea — military, merchant marines and pleasure boaters.

Prayers are read, and speeches given along with a solemn ceremony commemorating the POW/MIA. A choir, bagpiper and trumpeter perform during the ceremony to a crowd of over 300 gathered at the Pier Plaza and spilling over along the pier, onto the beach and into the street.
Coast Guard Morro Bay’s color guard, and the Sea Cadets in their dress uniforms lead the procession down the pier where a wreath of flowers is cast into the sea. The Morro Bay Harbor Patrol and USCG patrol boats sit offshore, water canons spraying a watery salute and war planes from the Esterella Warbirds Museum in Paso Robles do the “missing man formation” flyover (weather permitting) of the pier.

It’s become an endearing and a unique ceremony held on a day meant to remember fallen warriors, honoring all those lost at sea and who might not have a grave for loved ones to visit nor a headstone commemorating their lives.
O’Brien said they will return. “We will be doing it next year,” she vowed.