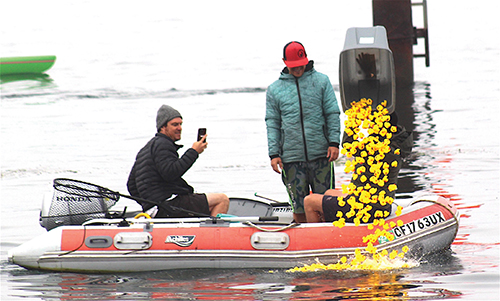 The Club let loose 591 ducks from a raft near Channel Marker 12, off The Galley Grill & Bar and the incoming tide moved the yellow mass down the bay towards the finish line at the Tidelands Park floating dock.

And like a car race or maybe a footrace, the mass of bright toys quickly strung out in a line.

In just about 18 minutes, the lead pack of ducks were nearing the finish, with a group of them attempting to take wrong turns through the moored boats. Race officials on kayaks and paddleboards guided them back into the main channel.

The officials did double duty, as the Club was required to make sure that all 591 ducks made it safely out of the water.

First place went to Leonard Moothart of Los Osos who is past president of the Los Osos Rotary Club, taking the $300 first prize.

Second place and $200 went to A.J. Martin, who is a new local veterinarian, according to Rotarian Jude Long who officiated the race. Taking third was Robin Carter, who won $100.

And last place, according to Long, went to Courtney Huckabay, who “sadly didn’t win anything,” Long said. (Perhaps for the Third Annual Ducky Derby they can hatch some kind of zonk prize for last place.)