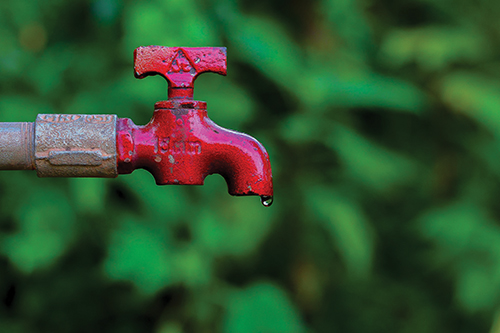 The Los Osos Community Services District will continue exploring ways to bring in new drinking water sources, in an attempt to bolster what the County considers an aquifer in trouble.

The CSD board voted 4-0 Oct. 6 to send a letter to the County “expressing the District’s interest in acquiring State Water,” according to a staff report.

They also authorized the staff to continue negotiations to secure water, preferably Table A State Water, which is “a more assured and reliable water contract.”

They allocated some $80,000 to do environmental review work on a preliminary design the CSD put together in a “Technical Memorandum” that was competed by the Wallace Group, an engineering firm from San Luis Obispo.

That work comes on the heels of a County report in 2021 that said Los Osos’ water supply was in danger. The “County Regional Water Infrastructure Resiliency Plan,” as the study was called, “ranked Los Osos as one of the top five most vulnerable communities for future water supplies because of its single source, local groundwater.”

So the alternative for Los Osos is State Water, which is somewhat ironic because in the early 1990s, the town rejected tapping into the “Coastal Branch of the State Water Project,” the pipeline that brought Northern California water to the Central Coast.

The Chorro Valley Pipeline branches off the main pipeline near the top of Cuesta Grade and runs down the Chorro Valley, perpendicular to Hwy 1. It delivers Morro Bay’s 1,313 acre feet a year allocation of State Water. State Water arrives in Morro Bay fully treated and fit to drink.

What’s this water supposed to do for Los Osos? “Operationally,” the report said, “the conceptual plan is to use supplemental water as a strategy to help, in the short-term, balance and add long-term resiliency to the groundwater basin. With the variability of water supply available from the State Water Project from year to year, the plan is to take State Water during wet years when supplies are readily accessible. This would allow for maximum recharge of the Los Osos groundwater basin and fosters long-term recovery of the basin. During periods of reduced State Water supplies, the District would rely more on the groundwater basin.”

The stated goal is to achieve “long-term resiliency of the groundwater while not be overly reliant on outside water sources.”

Groundwater would remain the town’s No. 1 source of drinking water, a situation that led to Los Osos’ water supply coming into jeopardy.

Those efforts are spelled out in the “Basin Plan” an agreement the town’s water purveyors — LOCSD, Golden State Water, SLO County and S&T Mutual — reached to better manage the water basin, which has experienced seawater intrusion.

It’s the smart thing to do. “The District will remain committed to the basin management strategies in the Los Osos Basin Plan, but with the changing climate and unknowns of future weather events like extended drought periods; it is prudent and good planning to consider other water sources.”

CSD officials have reportedly met with Morro Bay and County officials to discuss pipeline alignments and “the challenges that may be encountered during design and construction.”

The early cost estimate of $8 million might be a tough sell to residents in Los Osos, of which the CSD only sells water to about half. So the cost allocations the CSD has mentioned thus far are to have these preliminary costs spread about the CSD’s various funds.

“In order to equitably pay for the work,” the report said, “staff is recommending that the Board reallocate the Zone A revenue since this is a District wide property tax since the project has a District wide benefit. By doing this, it will not place the burden of paying this expense solely on the District’s water customers.”

The report explains that taking money from the so-called Fund 301 (property taxes to support the fire department), was OK because they’d gotten a big “refund” from Cal Fire because the State Agency, which the CSD contracts with through the SLO County Fire Department, overcharged them.

“Though it is important to maintain a high level of funding for emergency services,” the report said, “Fund 301 recently received a $331,000 refund from Cal Fire for an overcharge for fiscal year 2021-22 and realized a $300,000 decrease in Schedule A charges for fiscal year 2022-23.” However, the CSD expects to see an increase in costs as Cal Fire is negotiating a new union contract. “It is unknown at this time what the impact of these negotiations will have in the future.”

SLO County is entitled to 25,000 acre feet per year (AFY) of State Water, which is controlled by the County Flood Control and Water Conservation District and only 10,577 AFY is spoken for, which includes so-called “drought buffers.”

Morro Bay has such a buffer, having contracted for 1,313 AFY and pays for another 1,313 a.f. as a buffer, so that when the State cuts deliveries due to supply shortage, Morro Bay doesn’t lose water until the cut drops below 50%.

The subscriptions mean the County is holding onto 14,423 AFY a year and frankly doesn’t know what to do with it.

In at least one recent year, the County sold much of that unused allocation to water purveyors further down the pipeline, but that’s not a good way of dealing with this excess.

“The State has instituted new water management tools,” the CSD report said, “which make it easier to purchase and sell water within the system. Additionally, the County holds approximately 14,000 acre-feet of un-allocated water, which the Board of Supervisors has indicated needs to be allocated in the near future to remove the property tax burden from properties not benefitting from the project.”

Indeed since its inception in the 1950s and construction in the 1960s, private property owners have paid a small charge on their property taxes for the State Water Project and continue to do so today whether or not they actually receive any water.

The CSD is also betting that there are some SWP subscribers that won’t use all of their annual allocations, and the CSD might be able to purchase some of that water.

“These changes,” the CSD report said, “plus the willingness of some State Water subcontractors wanting to sell some of their excess allocation, provide the District a unique opportunity to secure water for the community. Inquiries and negotiations on multiple fronts are complicated but staff is confident that there will be water available as the separate prospects unfold.”

So what is State Water? According to the Department of Water Resources’ website (see: water.ca.gov/Programs/State-Water-Project), “The California State Water Project [SWP] is a multi-purpose water storage and delivery system that extends more than 705 miles — two-thirds the length of California.

“A collection of canals, pipelines, reservoirs, and hydroelectric power facilities delivers clean water to 27 million Californians, 750,000 acres of farmland, and businesses throughout our state.

“Planned, built, operated and maintained by DWR, the SWP is the nation’s largest state-owned water and power generator and user-financed water system. The project is considered an engineering marvel that has helped fuel California’s population boom and economic prosperity since its initial construction.”