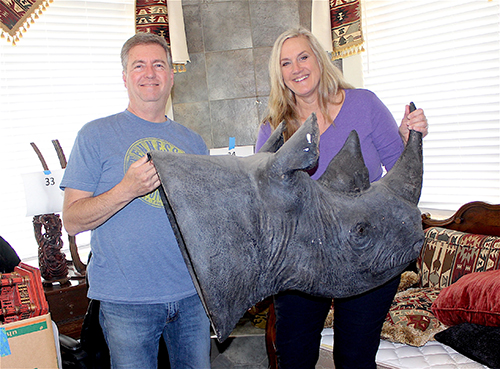 Doug and Jennifer Little, owners of Slocal Estate Auctions, often find unusual items amongst the belongings of someone who has died, like this totally cool Paper Mache rhinoceros head.

Readers who may have lost a loved one that left a house full of stuff or simply want to de-clutter their lives and downsize their belongings can get some much needed assistance through a company in Morro Bay.

Slocal Estate Auctions is an online estate auction site owned and operated by Doug and Jennifer Little, who’ve teamed up with other localized auction companies with the collective website that features auctions from the Central Valley to Southern California (see: slocalestateauctions.com).

Doug explains that he was operating a store, Junque Love, in Marina Square on the Embarcadero for several years when the auction idea sort of hatched itself. And when the coronavirus pandemic response hit, made for an easy transition from brick and mortar store to ecommerce.

He realized he couldn’t buy all the stuff people were bringing him, “You’d need football field sized warehouses; I couldn’t hold it all.”

Junque Love was already 5-years old when COVID-19 hit, which Doug said was followed by his being forced to close as a “non-essential” business, a term that bothers him quite a bit.

He had several retired ladies that always offered to help in the store, he recalls, and he had them working part time while he did more and more auction stuff starting in 2019.

“In March 2020, the Government said I was not allowed to go into work anymore,” Doug says. “That next Monday I laid everyone off and then I had to close my business.”

With a large monthly rent payment due and being unable to open the store for months, he had little choice but to give it up. He’d already been doing some online selling, so making the switch to an auction site seemed natural, since the couple had done it in Northern California before they moved to Morro Bay.

The online sales, Doug said, could stay open. He said it was an essential service because it allowed people to move; and it allowed families to transact and settle an estate.

When COVID hit, it closed down in-person auction sales and some estate sales businesses closed. Some tried to do it online, too, Doug says.

Oddly enough, COVID played a big part in why and how Jen came to join her husband in this newest venture. Jen Little was the City of Morro Bay’s tourism director, representing the City and providing staff for the Tourism Business Improvement District (TBID), an assessment district the lodging industry formed to bolster tourism promotions.

Jen was the only tourism director the City has ever had and likely ever will have. COVID lockdown began in March 2020 and Jen said she was laid off in June after the City Council decided to suspend all tourism promotions out of fear of the virus being carried to town with the tourists. COVID shut down her job and she was laid off.

Now the TBID has again formed a non-profit corporation and taken over promotions from the City using it’s own staff. She didn’t even consider trying to get her old job back, and seems delighted in the auctions for a variety of reasons.

First they bought rights to the software program that’s used to display items, record bids, and collect payments for use in this region. And they’ve got 10 people on in their group, Jen says. Those groups hold auctions from Fresno, to Bakersfield and Arroyo Grande into Southern California. The other auction businesses pay a hosting fee and the website is chock full of auctions items.

There is no lull in their work. “The phone rings every day with people needing our services,” Doug says. With estate sales, he explains, an elderly parent or grandparent dies or moves into a nursing home and “the kids come flying in from out of town to take care of things,” Doug says. And when they open the door to a house stuffed with knick-knacks, antiques, furniture, clothing, and everything else imaginable, they get overwhelmed quickly.

And, remember, they live out of town and don’t really have time to stick around, inventory everything and then hold garage sales.”

One call to the Slocal Estate Auctions could be the answer to a lot of prayers. “The average estate sale sells 65% of the items,” Doug explains. “Our online auctions invite more than the neighbors, and we ship all over the U.S.”

Doug comments that their online database is constantly growing. “It smoothens out the transition for those who have to settle an estate. We live in a retirement town, everything is online with full disclosure on what is for sale and how much it sold for, and it’s all documented. We can put families at ease; take out the stress for the family.”

She adds that she has expertise in art from her studies at Cal Poly, and Doug knows jewelry and rare coins. Part of their service is advising people as to what something might be worth and doing a bit of treasure hunting of sorts.

Doug says he’s gone to a home of someone who died to meet the family and go over what’s been left behind. The first thing they want done is for all family members to walk through the home and pick anything they want to keep, that helps smooth over hard feelings that can arise later over just about anything that’s left in a home.

“We always do a preview,” says Doug. “We try to decide if it’s something we can sell — this isn’t a garage sale.” He notes that a sale will get more traction online the more items they have for sale.

He and Jen methodically go through a home cataloging each item, bundling similar items together to attract bidders’ attention. “We take 12,000 photographs a day,” she says. They often find valuables where family members never thought to look.

Doug relates a story of a woman in Morro Bay whose mother had moved to an assisted living facility. They met at mom’s home and started going through things. Not seeing much there, Doug says he asked if she had any jewelry?

Yes, and when a file cabinet drawer was opened, Doug says he was astonished at the cache of antique costume and fine jewelry they found, much of it silver and gold.

Then he asked if there were any collectibles or coin? Sure enough, in the next drawer up, they found numerous coin collections worth thousands.

He says the woman’s goal was to make enough money to pay for one month at the nursing home and the auction — rich with jewelry and rare coins — raised tens of thousands of dollars.

“As seniors get older,” says Jen, “they don’t realize the value of things. We’re always finding gold and silver.”

In Santa Maria, they explain, there was one family that thought a bunch of jewelry was fake and worthless. When Doug and Jen went through it, they discovered it was all gold and diamonds. “They were going to just give it all to Goodwill,” says Jen.

Doug says is a big difference in what a person’s kids see as having value versus the true value. “One man’s junk is another man’s treasure,” he laughs. “We encourage people not to throw away anything.”

Jen says they recommend family members take whatever they want to keep out of a home and then leave. “We also request they not be there on pick-up day either,” she says. Seeing family heirlooms leave in the arms of strangers can be unsettling.

They also keep the address of the home confidential and reveal it only to someone who has won an auction, so they can pick up their items. If they have to, they can ship it to someone who lives far away, because after all, the nature of an online auction opens it to the world.

They can sell a single item or a house full of items and every item starts with a $5 opening bid.