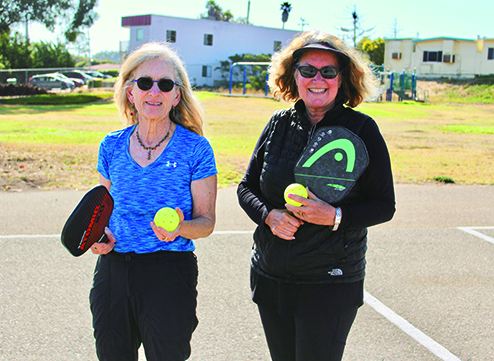 Pickleball fans Margaret Lindt and Fran Gallo are ready to play and invite others to join the fun at Sunnyside Elementary School, 880 Manzanita Dr., Los Osos.

Pickleball is one of the fastest growing sports in America with approximately 4.8 million players. It has two international governing bodies and two national professional tours with a smattering of athletes that are sponsored to the tune of seven figures a year, and it is an Olympic hopeful with paddles aimed at 2024 or 2028.

Readers might wonder what the heck pickleball is. Hint, cumcumbers preserved in vinegar or brine are not a part of the game. It is described as a combination of badminton, ping-pong and tennis that can be played indoors or outdoors on a badminton-sized court with a net similar to a tennis net. It is played with a hard, plastic perforated ball and paddles similar to those used in ping-pong, but bigger and usually made of more advanced materials.

The game is easy to learn and fun for mixed groups, no matter the age, gender, or skill of the players.

Until last month, San Luis Obispo County Parks and Recreations operated six dedicated courts, not one of which was in Los Osos.

Margaret Lindt, of Los Osos, says the court situation does not meet the demand.

“In 2017, I learned how to play with my husband over at Del Mar Park in Morro Bay,” Margaret said. “I said, ‘How come we don’t have any place to play in Los Osos?’ So, I tried to convince the county to do something, but they would not.”

After that, Lindt stopped playing for a while, but last November she hit the courts with family in Santa Barbara. The fun of the sport rekindled her drive to advocate for more playing grounds locally.

“I have been pestering them [the County] since the end of November,” Lindt said.

Costs are part of the problem putting the nix on new courts, according to the County.

“There is demand for a lot of recreational resources in Los Osos and elsewhere in the county,” said Assistant Director of Parks & Recreation, Tanya Richardson. “This includes additional trails, athletic fields, dog parks, playgrounds and sport courts. We don’t have the resources necessary to meet everyone’s demands immediately, so we have to prioritize.”

The County did recently create a court, of sorts, at Sunnyside Elementary School in Los Osos. It is bare bones, and players need to bring a net, which can be purchased for about $80 and up, but it does offer an alternative place to play. However, no tournaments are allowed. As it is, the court cost approximately $400 and was paid for out of Parks & Recreation Budget.

The idea is unique in that it is trial run in a collaborative project with San Luis Coastal Unified School District.

“The courts will stay as long as it is fulfilling a need and no issues arise from their usage,” Richardson said. “The courts are on school property, and the school is used for other purposes. The impacts on parking are the main reasoning for no tournaments.”

Sunnyside is a bounce in the right direction, but not a stopping point.

“They threw me a bone by doing that at Sunnyside. I really wanted them to make it equitable,” said Lindt, who wants to see either designated courts installed or at least the conversion of one of the tennis courts at Los Osos Community Park into a pickleball space.

The tennis courts offer the proper playing surface as opposed to the asphalt at Sunnyside, the former is better for the equipment and the players. A group of regulars use string and tape at the tennis courts to get some playtime in. They meet on Tuesdays and Thursdays from 1 to 3 p.m.

The county says that the tennis courts at the park are heavily used and bringing in a different sport would impact the other players.

“There are some courts that have been underutilized by tennis where shadow lines or conversion are appropriate, and we have done that,” said Richardson. “At Los Osos Park the tennis courts are not underutilized and are used quite frequently by tennis players. Adding the shadow lines would significantly increase the demand for court time without increasing the supply of courts to meet that demand.”

There is a recently updated master plan for the Los Osos Community Park that includes a long awaited dog park. Some folks are hoping for more court space, but even if money dropped out of the sky, plans would be at a standstill until the Habitat Conservation Plan is complete.

“The area is large enough to accommodate both a dog park and additional courts,” Richardson said. “We need to wait for the Los Osos Habitat Conservation Plan to be finalized so that we will know what conditions will be in place to proceed with any projects for this area. This is certainly a project that can be pursued once that HCP is final.”

In the meantime, Lindt and fellow player Fran Gallo will continue to utilize the Sunnyside space among others.

“This is a huge improvement for us,” Gallo said while setting up a net at the elementary school. “I would love for more people to join us. This group is very non-competitive; it’s not intimidating. ”

A group of folks have starting playing most Sunday mornings at 8 a.m. at the school, and all are welcome.

“It has a social aspect to it; you can meet people there,” Lindt said. “With COVID, it’s very safe because you’re outside. For older people who may not want to play tennis anymore because of whatever reason, there isn’t as much moving around, you don’t have to hit the ball quite as hard, and you aren’t supposed to move backwards.”

There is good news for players, County Parks recently painted shadow lines on one court at Hardie Park in Cayucos and is currently working with Cal Poly to inventory tennis and pickleball courts and the number of active players in the county.

“This will give us the data to prioritize appropriately,” Richardson said.  “We are saying ‘no’ for now but once we have more objective data, we will make our determination of the best path forward to meet everyone’s recreational need.”

Richardson said the next steps are to advocate for the completion of the HCP and then for funding the design and permitting of pickleball courts at the park.

For readers who are wondering why the game is called pickleball, there is some debate, but according to “Pickleball Magazine,” yes, there is one, pickleball was founded by Joel Pritchard, Bill Bell and Barney McCallum on Bainbridge Island, Washington in the summer of 1965. Within days, Joel’s wife, Joan, had come up with the name “pickleball”—a reference to the thrown-together leftover non- starters in the “pickle boat” of crew races.