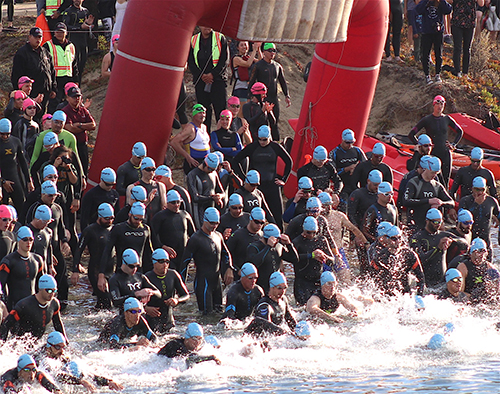 Morro Bay will return to the athletic world stage in 2023, after the City inked a contract to host three, annual professional triathlons.

The City Council unanimously approved going ahead with signing the contract with World Triathlon Corporation, Inc., (Ironman Group) a for-profit company based in Tampa, Fla., that puts on the famous Ironman Triathlons and other athletic events all over the world.

The City, Visit Morro Bay and the Ironman Group will be partners in the endeavor, which is tentatively slated to happen some time in May 2023 and the following two years as well.

Visit Morro Bay is the business name for the Tourism Business Improvement District or TBID, an assessment district with its own governing board, which charges a 3% per night tax on motel, B&B, and vacation rentals, and uses the money to promote tourism.

It is the phoenix that rose from the ashes of the City’s tourism department, which died with the Coronavirus Pandemic response in June 2020, when the City ceased all promotions in response to the pandemic.

“IRONMAN 70.3 Morro Bay Triathlon” is predicted to cost the City some $55,000 a year with $40,000 in “staff” costs for police, fire, maintenance, etc., and $15,000 for “logistics” to include parking, shuttling, waste management and no doubt numerous other things that will pop up as the event draws nearer.

However, City Manager Scott Collins said the City expects to be reimbursed for much of that cost — $20,000 for the staffing and $5,000 in shuttle costs.

Collins said that because the event has the potential to be a boon for the local economy, the money should come out of the Council’s economic development fund to cover whatever the company doesn’t.

Visit Morro Bay is paying the annual event sponsor fees to Ironman Group, which Collins said would be $30,000 for each of the first two years and $25,000 the third year. Visit Morro Bay will also provide the support staff with motel rooms.

The City is giving the company some red tape relief, too. “Given that the City is a sponsor of this event, alongside Visit Morro Bay, and Ironman Group,” Collins said, “the City will waive City permit fees and parking lot fees for the event.”

What are the likely inconveniences to the public with the event?

It’s likely that public facilities and parking lots will be closed. Which ones depends on the courses chosen and where staging areas need to be set up.

The launch ramp may have to be closed to boaters and the Embarcadero closed to vehicles during the event.

Street closures and traffic controls through Downtown would seem inevitable, as the triathlon needs to use the bay, the streets and probably the highway, too for its various swim-bike-run segments.

As with the now defunct Amgen Tour of California professional cycling race, which stopped in Morro Bay three times before it too died, the City believes it will pay off for local businesses, and add significantly to the City’s revenues.

“Overall,” Collins said, “immediate return from hosting the event will be felt in thousands of hotel and vacation rental overnight stays, economic activity at local restaurants, retail shops, grocery stores, gas, etc. and in the form of tax revenues to the City. To that end, Ironman Group has committed to the best extent possible to both use local suppliers for implementation of the event, as well as partner exclusively with properties located within City Limits for event-related athlete and staff room blocks.

“In all the expected tax revenue return to the City during the week of the event is anywhere from $200,000 to $300,000. Staff anticipates the greater return will come to the City post-event over time through the worldwide exposure of Morro Bay as a recreation tourist destination.”

Collins told EBN that there wasn’t a lot of interest from the public for or against the issue.

“Over the course of the two Council meetings the item was discussed,” Collins said, “we heard from a few folks who were excited about it and one or two who were concerned about impacts to the bay and how additional revenues from the event may be spent by the City in the future.”

Additional taxes the triathlons might generate would be primarily sales and bed taxes, and those go into the City’s General Fund. Any earmarks outside the general fund for the money would have to be voted in by the Council, most likely during budget hearings.

Estero Bay News contacted the Ironman Group via email and got a response from their PR Office: “Thanks for reaching out. We can confirm that we are in active conversations with the City of Morro Bay about hosting an event in the region and are hoping to have an official announcement in the coming weeks.”

The Ironman Group has humble beginnings, as Collins said the company started out in the early 1970s as a group of friends and endurance athletes who put together informal competitions across three sports — swimming, cycling and running — which eventually evolved into the modern triathlon.

World Triathlon Corporation, Inc., was founded in 1990 by David Voth, James P. Gills and Valerie Silk and has grown into an international corporation that puts on triathlons, road and mountain bike races and foot races, some 374 every year in 53 countries and six continents.

California has hosted many of the Ironman events, and currently has long-running Ironman Group events in Santa Cruz and Oceanside.

Collins came to Morro Bay from Santa Cruz and worked on their ironman event. He said Ironman Group approached the City earlier this year about doing an event in Morro Bay in 2023.

“Ironman Group representatives,” Collins said, “conducted a site visit in Morro Bay in March 2022 to get a lay of the land for a potential event. During that site visit, they met with City staff to discuss racecourse options, event logistics and community benefits and impacts. The Ironman Group then conducted extensive market research and determined an event in Morro Bay would complement their event offerings in Oceanside and Santa Cruz.”

The City Council was given a presentation on the matter and told staff to iron out a contract and bring it back by June 28 for approval, which it did.

When and What’s Ironman

The event would be a total of 70.3 miles, Collins said, and consist of swimming, biking and running segments.

They want to hold it in May 2023 “because of the warmer weather and the fact it wouldn’t conflict with their other California events,” Collins said. “They anticipate upwards of 2,500 participants and several thousand spectators to attend alongside participants.”

The event itself would be on a single Saturday and they plan to center it around the harbor and waterfront. They might need the Tidelands Park parking lot for a staging area and the transitions from swimming to bike and from cycling to the run, with a finish line somewhere on the Embarcadero.

Though the race itself is a 1-day affair, the set up work starts long before the starting gun goes off.

“Event set-up begins several weeks in advance,” Collins said, “but actual impacts to the Embarcadero would be felt just a few days in advance, with full road closure just during the event day. The boat launch ramp would also be closed just the day of the event.”

They plan to swim in the bay but where they will enter and exit the water has yet to be determined.

The biking portion would start somewhere on Embarcadero, travel up through town and most likely out onto Hwy 1 for what promises to be a long bike ride.

The running leg of the race is expected to start on The Embarcadero, run up through town and possibly out to Los Osos and back. Collins said none of the routes has been decided on and whatever the Ironman Group proposes will have to be reviewed and approved by City officials.

Chief among those is likely to be the Police Department, which would have to coordinate the event’s security and street closures. But the fire department would be expected to play a part in terms of medical aid and emergency response, and the harbor patrol and lifeguards will have to keep the swimmers safe. And the City maintenance crew will be the ones to clean up afterwards.

“In addition, the City will provide staff — law enforcement, paramedics, and lifeguards — during the event to ensure safety of all involved, including participants, staff, spectators and community members. The City will help link Ironman Group to local volunteers and help secure hotel accommodations for Ironman staff during the event week.

Ironman triathlons have worldwide appeal; the events have a huge Internet audience; and it’s apparently a rich man’s game.

“According to athlete surveys conducted by the Ironman Group,” Collins said, “participants average $247,000 in annual household income, 81% book hotel/vacation rentals when traveling to Ironman events, 69% of participants stay four or more nights in market during the week of the event, and a quarter of participants travel to the market to train in the weeks and months leading up to the event.

“Based on this and the fact of an influx of thousands of spectators, a typical Ironman event has a direct economic impact of $10 Million on the specific market. Participating markets experience on average an $800,000 impact on all tax revenues (federal, state and local combined).”

Ironman Group is big on the Internet. “The Ironman Group has a total digital reach of 6.4 million individuals worldwide. A Morro Bay event would be marketed through all of Ironman’s channels [Facebook, Twitter, Instagram, websites, apps, etc.].”

Collins pointed out that the City has worked hard and spent a lot of time and money promoting outdoor activities including sporting events like professional surfing, and an Ironman Triathlon here is more of the same.

“Morro Bay has worked hard to link outdoor recreation enthusiasts with our community as a prime destination for those activities,” Collins said. “What started with the AMGEN Tour of California pro bicycle race, Rock to Pier Run, and local triathlon events, would be strengthened significantly by hosting an Ironman event that has international reach.”

But even more so, bringing this event to Morro Bay would re-establish Morro Bay in the eyes of worldwide professional sporting events. Collins was all-in.

“The economic benefits to the local business community, tax revenue to the City and long-term exposure to a world-wide audience,” he said, “in the opinion of staff, far outweigh the impacts of the event.” 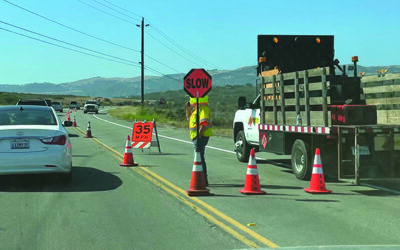 Traffic delays on South Bay Boulevard will continue into the fall, as a telecommunications company lays down new...

It might not be much of a “Sharp Dressed Man,” as ZZ Top sings, but the City of Morro Bay is goin’ crazy, “’cause its...