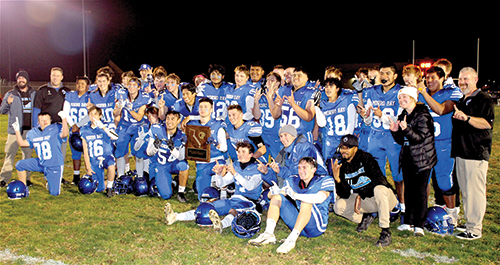 Morro Bay High’s Varsity Football Team made history this year, shaking off a so-so regular season where they finished third in the Ocean League; but catching fire in the CIF Playoffs and battling their way to a Central Section Div. VI CIF Championship.

It was just the second CIF Championship ever won by the school’s football program, the other being the 1995 Team.

The Pirates followed that up with a hard-fought 35-27 win over Loara High of Anaheim at home before a packed crowd to take the Div. 7AA Regional Championship and setting up the school’s first-ever chance at a State Championship against Falls River High of McArthur, Calif., which is up in the Mt. Shasta Area.

But Falls River proved too tough for the Pirates, as the Bulldogs prevailed in the State Championship Game 43-13 ending the magical run for Morro Bay with an 8-7 overall record.

The Pirates are shown here after the win over Loara High and capture of the CIF Div. 7AA Regional Title.