Poly Director of Jazz Studies and Guests to Give Recital 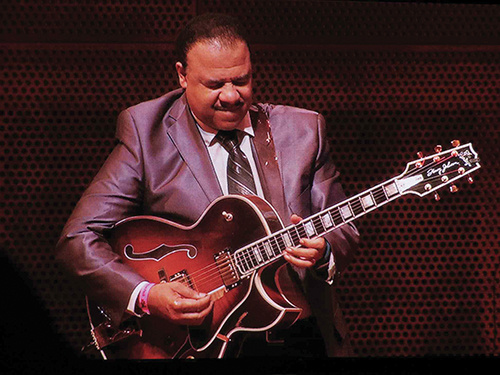 Arthur White, Cal Poly’s director of jazz studies, presents a jazz recital with guests at 7:30 p.m. Thursday, Oct. 6, in the Pavilion of the Performing Arts Center.

The program will feature original compositions by White and Johnson.

White is a Kansas native who spent several years of his professional career teaching and performing throughout the Midwest. He has been at Cal Poly since 2019. More information about White is on his faculty website.

Johnson began playing guitar in his hometown of Chicago when he was 12. His musical roots include blues, gospel, jazz and rhythm and blues. In addition to his hit solo recording projects, he has recorded with vocalists Joe Williams and Vanessa Ruben, saxophonist Richie Cole, among others. He has performed with Nancy Wilson, Marlena Shaw, Angela Bofil, Dizzy Gillespie, Freddie Hubbard, Grover Washington Jr. and other notable artists.

Daugherty, in addition to playing piano, is a conductor, musical director, recording artist, composer and arranger. She is currently touring the U.S. as music director/conductor of “SIX the Musical.” As a solo jazz artist, her most recent jazz trio album, “Bring Joy,” earned a four-star review from Downbeat Magazine and was listed as one of its Best Albums of 2017. She has collaborated with woodwind specialist Victor Goines of the Jazz at Lincoln Center Orchestra and has led and participated in clinics that focus on jazz and making a life as a professional musician.

Black began playing the clarinet when he was 8 and later became interested in upright and electric bass. In 2008, he moved to from Kansas to Los Angeles, where he has worked with a variety of artists, including Kamasi Washington and the West Coast Get Down, Terence Blanchard, Marcus Belgrave, Terrace Martin, Kenny Burrell and the late Solomon Burke. Black continues to record and tour and is working on releasing his debut album this fall.

Taylor has spent his life discovering the drums, rhythms and music from all walks of life. He studied classical percussion and music education at the University of North Carolina Greensboro, where he earned his bachelor’s and master’s degrees. He spent 10 years working, playing and teaching with world-renowned jazz educator Jamey Aebersold. That experience gave him the opportunity to meet and perform with some of the world’s most influential jazz musicians. He has shared the stage with Terell Stafford, Branford Marsalis, Joey Calderazzo, Joe Chambers and others. Taylor is assistant professor at North Carolina Central University. He has written articles for Modern Drummer Magazine and The Music Educators Journal, and he has written a hip hop music appreciation textbook, “Yo’ Check This: Topics in Hip Hop.”

Tickets to the recital are $20 general and $10 students. Tickets can be purchased from the Cal Poly Ticket Office between noon and 6 p.m. Monday through Saturday. To order by phone, call 805-SLO-4TIX (805-756-4849). Event parking is sponsored by the PAC. The Music Department offers a 20% discount to patrons who buy season tickets to four of its events through the Cal Poly Ticket Office.