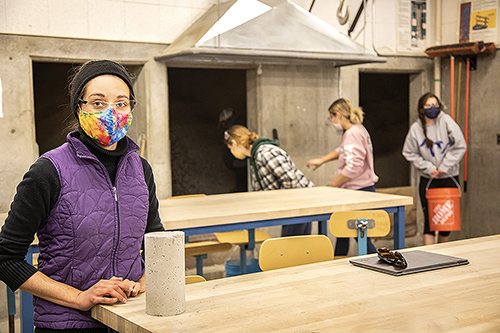 Cal Poly faculty member Anahid Behrouzi (left) in the Concrete Lab as students measure aggregates for use in a concrete mix as part of the Reinforced Concrete Design course. Photo by Cal Poly CAED/Josef Kasperovich

A Cal Poly architectural engineering faculty member was honored for excellence and innovation in teaching by the American Concrete Institute (ACI), a leading professional organization in the global concrete industry.
Anahid Behrouzi is the 2021 recipient of the ACI Walter P. Moore Jr. Faculty Achievement Award, which recognizes new faculty members for how they teach concrete design, materials or construction. She has been at Cal Poly since 2016. The ACI Board of Direction bestowed the honor specifically “for blending new technologies, hands-on experiences, and storytelling to motivate students and to make concrete design concepts tangible.”
In the past five years at Cal Poly, Behrouzi has taught courses in reinforced concrete design, structural analysis and dynamics. She earned master’s and doctoral degrees in civil engineering from the University of Illinois at Urbana-Champaign, where she investigated the seismic response of non-planar reinforced concrete structural walls. Prior to that, she received undergraduate degrees in civil engineering as well as Spanish language and literature at North Carolina State University, in Raleigh.
“Teaching reinforced concrete design has been a longtime passion sparked by my very first large-scale experiment of concrete bridge columns for the Alaska Department of Transportation conducted at North Carolina State University during summer 2011,” Behrouzi said. “I will never forget the first time I got to operate a 20-ton crane in the lab, tie the rebar cage and help pump concrete for the column caps.
“Since then, I have sought out every opportunity to build and break concrete of any scale —cylinders, beams, walls — to engage others in the excitement of hands-on research and improving earthquake safety of our built environment.”
Behrouzi is a two-time ACI Graduate Fellowship recipient, a past member of the ACI Student and Young Professional Activities Committee and faculty advisor of the ACI S805 Concrete Collegiate Council. She currently serves on the ACI Scholarship Council and ACI Committee 133, which conducts and reports on disaster reconnaissance.
At Cal Poly, Behrouzi advises and mentors undergraduate and graduate students — as well as at alma maters North Carolina State and University of Illinois — related to research projects, applying to graduate school, industry and faculty positions or fellowships.
The award acknowledges educators who have taught for less than seven years and takes its name from the late Walter P. Moore Jr., an ACI Fellow, former ACI Board member, and structural engineer and educator in Texas.
The American Concrete Institute, a nonprofit technical society and standards-developing organization, likes to say it is laying the foundation for the modern world. Its knowledge and codes have empowered engineers to meet the demands of a changing world through consensus-based standards, technical resources and educational, training and certification programs.
Various forms of concrete have been in use for more than 8,500 years including in the Great Pyramids at Giza. The ancient Romans were first to use this material widespread, creating structures that still stand 2,000 years later.
Portland cement was invented in the 1820s, and by the turn of the 20th century concrete was being used to build homes, bridges and streets. The first reinforced concrete high-rise (16 stories) in America was built in 1903. Reinforced concrete construction is so successful that many of the world’s most famous buildings — including the world’s tallest, Burj Khalifa in Dubai, which at 163 stories rises more than 2,700 feet — utilize this durable building material.
Behrouzi be honored at an award presentation during the Virtual ACI Spring 2021 Concrete Convention, scheduled March 28 to April 1. The convention is the global gathering place for advancing concrete materials, design, construction and repair. It brings together the world’s most well-known industry leaders with professionals looking to learn.